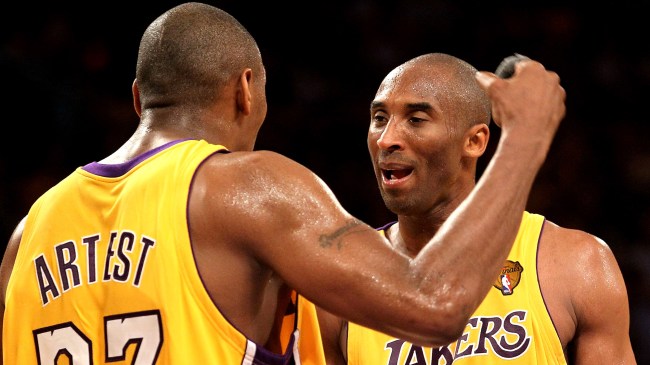 With all of his name changes, from Ron Artest to Metta World Peace to now Metta Sandiford-Artest, many NBA fans may have forgotten that he was actually a really good basketball player.

Dude played for 17 seasons in the NBA, interrupted by two seasons playing in China and Italy, was named the 2003-04 NBA Defensive Player of the Year, averaged 24.6 points during the 2004-05 season, and 13.2 points overall during his 991 games played.

Sure, there was the whole Malice in the Palace thing and the fact that he played for seven different NBA teams, plus two more overseas, during his 19-year career, but he stuck around despite all of his baggage because he could ball.

Artest spent the majority of his NBA career (which as I noted, isn’t saying much) with the Los Angeles Lakers, winning a NBA championship with them in 2010.

However, in true Ron Artest fashion, his tenure with the Lakers almost ended before it really got started, thanks to some ill-advised trash talk thrown the way of one Kobe Bean Bryant, according to Tania Ganguli and Broderick Turner of the Los Angeles Times.

During a meeting at the start of training camp, World Peace stood up to address the team. He told them he was happy to be there and that where he comes from things are handled a little bit rougher than they might be used to.

“One day in practice I just disrupted the whole practice because I didn’t want them to think, Metta’s on this team, he don’t got a ring, we got a ring, he just gotta come in with the ultimate respect,” said World Peace, whose Houston Rockets team lost to the Lakers in the 2009 playoffs. “It was still a lot of respect, but I had to — I just wanted to compete. I just got finished losing against these guys.”

He talked trash to Bryant and to Jackson, behaving as if he was an opponent, not a teammate. Eventually Jackson tried to defuse the situation.

In not at all surprising news, the story goes on to state that Artest was very happy to be playing for Phil Jackson because his idol Dennis Rodman also played for him.

It all worked out okay, though. Just like when Rodman joined the Chicago Bulls and Michael Jordan, the Lakers immediately went out and won the NBA championship.