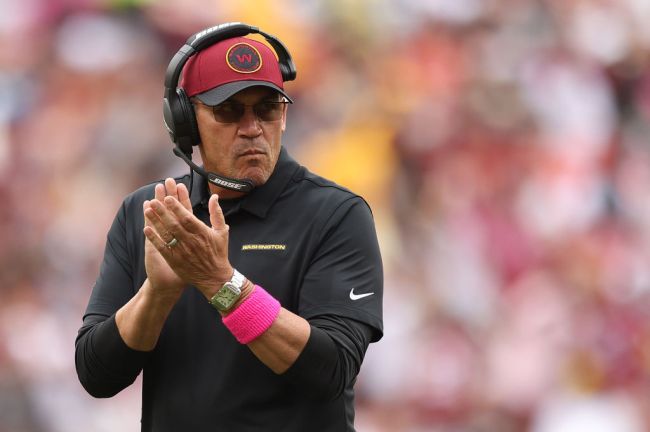 The Washington Football Team is 2-3 thus far into the 2021 season and head coach Ron Rivera is having a hard time. He spoke with the media on Tuesday and gave a bizarre quote about managing expectations.

Rivera, for some reason, wishes that they hadn’t won six of their last 10 games or the division. He says that because of last season, the expectations are higher for the team to perform this season and that it’s “hard.”

No, seriously. Rivera wishes that his team did not win the division last season because now he is expected to win this season. Even though that is his job.

Here is what he said to The Sports Junkies on Tuesday morning:

“You almost want to say I wish 7-9 last year wouldn’t have been good enough to win the division that way the expectations would’ve been much lower and been a little easier. This is hard. This hard.. This is the way it’s supposed to be. It’s supposed to be hard because that’s the only way you learn.”

So, if I am to understand his quote correctly, Rivera would rather his team have played worse last season so he could win less this season and still be considered successful without making the playoffs? Even though his team is off to a better start than it was last season?

And Rivera says that he is having a hard time coaching a subpar team? What?

To make things even more strange, Rivera discussed his team and said that he has a young roster in Washington.

However, Ryan Fitzpatrick was slated to be the starting quarterback this season. He is 38 years old.

So, in response to Rivera’s comment about youth, Eric Bickel completely changed the narrative.

“If that were true, they would’ve drafted a quarterback to grow with the young team, not Fitz,” he said.

Rivera went on to talk about the importance of growth and development within his roster and teaching maturity in his locker room. While he is not wrong, Bickel raised a very good point.

If the team does not expect to make the playoffs this season, like Rivera suggested they might not, then why did it choose to resign Taylor Heinicke and bring in Fitzpatrick instead of investing in a rookie or young signal-caller?

The entire interview was not necessarily what Washington Football fans wanted to hear. Maybe things will be less difficult for Rivera if his team misses out on the playoffs this year.