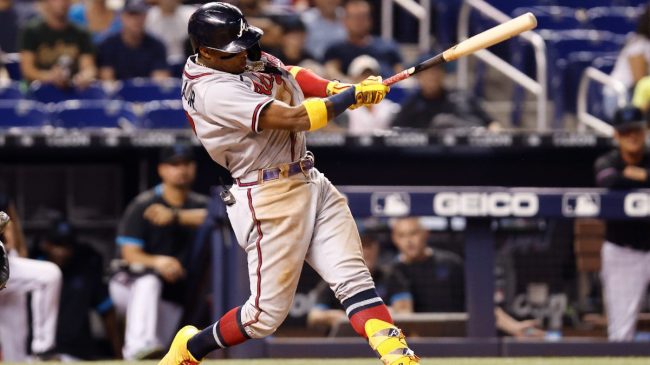 The Atlanta Braves suffered a major setback last season when superstar outfielder Ronald Acuna went down with an ACL injury.

The 24-year-old saw action in 82 games last summer before being forced to the dugout for the second half of the year. At the time of his injury, Acuna was hitting .283 with 24 home runs and 52 runs batted in. He was on pace to smack a career-high 47 bombs.

On top of that, Acuna was proving his worth as a true five-tool player. He’d recorded 17 steals, a .985 fielding percentage, and 44 extra base hits.

His absence, fortunately, didn’t keep the Braves from winning their first World Series since 1995. Still, they’ll be happy to get their star player back for the 2022 season.

Especially with it looking like three-hole hitter Freddie Freeman is on his way out of Atlanta.

On Tuesday, the team got a good look at what they’ll be getting back in the lineup in just a few short weeks.

Though he’s expected to return in May, Acuna was seen taking batting practice this week at a Braves’ spring training session.

He awed viewers with an absolute moon shot, then emphatically announced his upcoming return to the rest of the MLB. Check out the video below.

Ronald Acuña Jr. throttling a baseball off the scoreboard and announcing he’s back is exactly what I needed to kickstart my endorphins today. pic.twitter.com/qo0CItKpRr

After smashing the BP homer, Acuna shouts, “I’m Back!” The outfielder is hoping to return to MVP form as soon as possible.

Ronald Acuña, Jr., asked how quickly he can get back to his pre-injury, MVP-contender form:
“Right away.” pic.twitter.com/dPq0vpseO5

From the looks of that video, he’s not far off.