Ronda Rousey Was Spotted Getting A Concealed Carry Permit, So Of Course, Twitter Had MANY MMA-Related Jokes 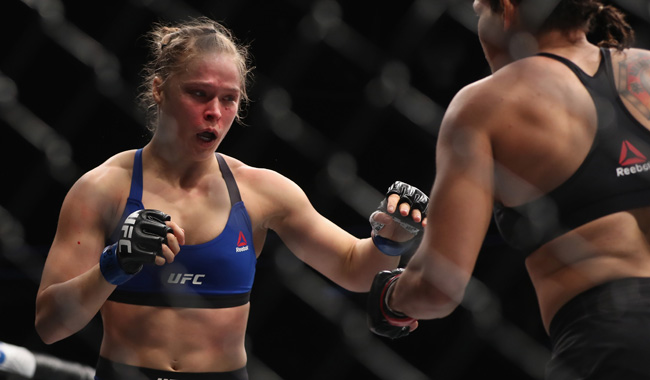 Earlier today we told you about how Ronda Rousey finally came out of hiding and appeared at Standing Rock to Protest Donald Trump’s Dakota Pipeline order.

HOWEVER, that wasn’t the first time Rousey was spotted this week.

On Tuesday, the folks over at TMZ reported that Ronda and her boyfriend Travis Browne showed up at a Las Vegas gun store where she applied for a concealed carry permit.

The UFC superstar and her boyfriend, Travis Browne, hit up The Range 702 gun store on Sunday where our gun enthusiast witnesses at the store say Ronda took a special course required to get a concealed carry permit.

Once Ronda applies for the permit, it usually takes around 90 days before she’ll get her card in the mail.

We’re told Ronda did some shooting at the range — which is also required for the test — using a blue Glock 43 9mm pistol.

Now as to why Rousey decided that she needs a concealed carry permit is still unknown, but if I was a betting man I would say it might have something to do with her house, you know, the one she likes to walk around naked, being vandalized recently.

Then again, I could be way off.

Thankfully, the fine folks on Twitter, as they often do, offered up a few ideas…

omfg shes about to come for amanda nunes and MAKE her give her the title https://t.co/tFpiF8kGx6

Ronda Rousey applied for a gun permit. I guess she just realized what was missing when she fought Amanda Nunez.

@TMZ @TMZ_Sports so she's gonna shoot people in the ring now since she can't win otherwise?

@TMZ She's going to need it with those last couple beatings she took.

@TMZ @TMZ_Sports "I will not lose anymore"

@TMZ she needs one.. cuz we've all seen she can't defend herself… LOL… looks good on her

@TMZ @TMZ_Sports She want to kill her trainer bc she got her ass beat again, it's not his fault you can't fight!😂😂

@smilingtomorrow @TMZ She'll win her next match for sure that way!!! lol

.@TMZ_Sports she's afraid @danawhite is gonna try to rob her like she did him in her last 2 fights @RondaRousey #ufc

@TMZ_Sports Been getting her ass kicked too much lately? She can't be packing heat in the Octagon #UFC