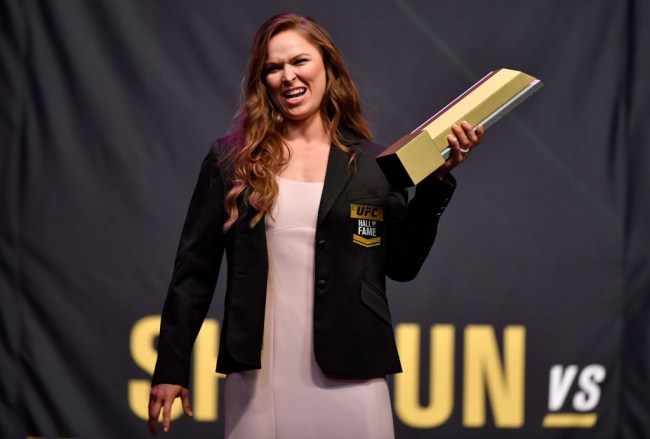 Yesterday, she ticked off the WWE world by going on Steve-Os podcast to talk about how she doesn’t plan on returning to the wrestling world anytime soon. Rousey said she “didn’t need the money” and called WWE fans “ungrateful”, which caused plenty of ire amongst wrestling fans.

“So it’s just like … what am I doing it for if I’m not being able to spend my time and energy on my family, but instead spending my time and my energy on a bunch of fucking ungrateful fans that don’t even appreciate me? I love performing. I love the girls. I love being out there … but, at the end of the day, I was just like, ‘Fuck these fans, dude.’ My family loves me and they appreciate me and I want all my energy to go into them. So that was my decision at the end of the day. It’s like, ‘Hey girls. Love what you’re doing. I’m gonna try and take all my momentum and push you guys as far as I can … fly little birds, fly! I’m going fucking home!’ And that was basically it.”

Today, Ronda Rousey didn’t hold back on Instagram after inciting some ire from wrestling fans.

Good thing Rousey is qualified to speak on the subject, with a UFC resume to back up her words:

Anyone who is outraged by me calling pro wrestling “fake fights for fun” and never been in a REAL fight. While you all are tip toeing around bruising some pro wrestlers’ huge soft egos – no one is thinking about all the REAL fighters you’re insulting when pretending pro wrestling is somehow on the same level of realism. Yes, I understand, wrestling 300 days a year for years on end is incredibly tough on the body and a difficult profession – but do you know what would happen if you got in 300 REAL fights a year? You would be dead.

It almost makes you wonder if she’s clamoring to get back in the Octagon with the UFC when things get back to normal.

Even if the fight sucked, the premise and build up would out-script anything the WWE writers room could ever come up with.

Maybe that’s the end game with Rousey’s “fake fight” fighting words for WWE fans here? Coming back for a *real* fight for a huge, one-time paycheck.

I’d be cool with it.

Goodnight #ROWDYONES and jabronie marks without a life that don't know it a work when you work a work and work yourself into a shoot,marks pic.twitter.com/hoif5DEGM8

Here’s the full podcast with Steve-O, for anyone who missed it: