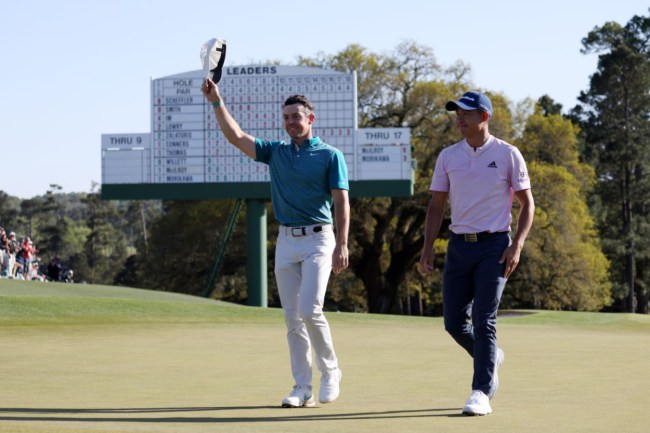 Rory McIlroy and Collin Morikawa both closed out their 2022 Masters in epic, and highly unlikely, fashion.

Both Morikawa and McIlroy found the greenside bunker right of the 18th green on Sunday. This left them both in a difficult spot to get up and down to save par. They didn’t see it that way, however.

McIlroy was the first to play from the bunker and used the slope right of the hole to perfection. It was quite a way to card an 8-under 64, which ties the lowest final round score in Masters history.

What a way to finish. McIlroy holes out on No. 18 to put pressure on the leader. #themasters pic.twitter.com/L5fWWbR9cj

Morikawa saw McIlroy’s shot and thought ‘anything you can do, I can do too.’ Shortly after witnessing McIlroy’s improbably hole out, Morikawa managed to make his bunker shot as well. The three on 18 capped off a 5-under 67 for Morikawa on Sunday.

Collin Morikawa sees McIlroy's chip in and answers with his own. #themasters pic.twitter.com/jGiEEdR1Gu

McIlroy and Morikawa had themselves an afternoon at Augusta National on Sunday as the two combined to shoot 13-under par. The rest of the field, with just a few groups still left on the course, have combined for a score of 39-over par.