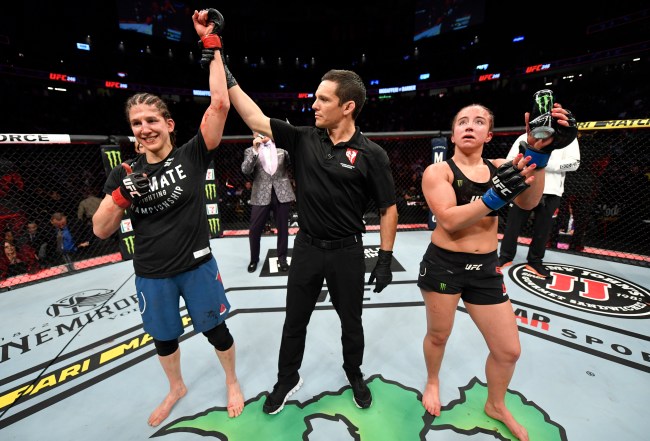 We’re just moments away from UFC 246 Pay Per View main card on ESPN+. The main event between Conor McGregor and Donald “Cowboy” Cerrone is just a few hours away, but that doesn’t mean there hasn’t been plenty of action at the T-Mobile Arena in Las Vegas.

Veteran flyweight Roxanne “The Happy Warrior” Modafferi made good on her promise to derail the Maycee Barber hype train.

Barber, who was undefeated going into the fight, has long been touted as a future UFC champion, maybe even the one to break Jon Jones’ record as the youngest belt holder in UFC history. But for now, everyone will have to cool it a bit on Barber, as Modafferi dominated the ground game to earn the decision victory.

Putting Barber in unfamiliar positions from the beginning, Modafferi really took control in the second round, capitalizing on a freak knockdown, which resulted in Barber pulling up lame on her knee. Modafferi jumped into Barber’s guard and did some serious damage with the elbows, cutting Barber badly over the left eye.

It was a 15 minute grappling clinic. Modafferi spent the majority of the contest in top position, landing punches and improving position. Barber had moments of her own, rolling out of danger, and threatening with submission attempts of her own, but Modafferi was too tough, too experienced, and too durable, beating Barber in every aspect of the game.

Earlier in the evening, lightweight Drew Dober delivered the highlight of the prelims, knocking out touted prospect Nasrat Haqparast in just 70 seconds.

A significant underdog, Dober gave a clean performance, taking no damage while landing punches with precision. Dober, who was listed as a live dog and solid pick at the sportsbook, countered Haqparast, with a perfect right hook.

The punch leveled Haqparast, sending the German-Afghani to the mat. From there Dober followed up with punches on the ground, forcing the referee to step in and waive off the fight.