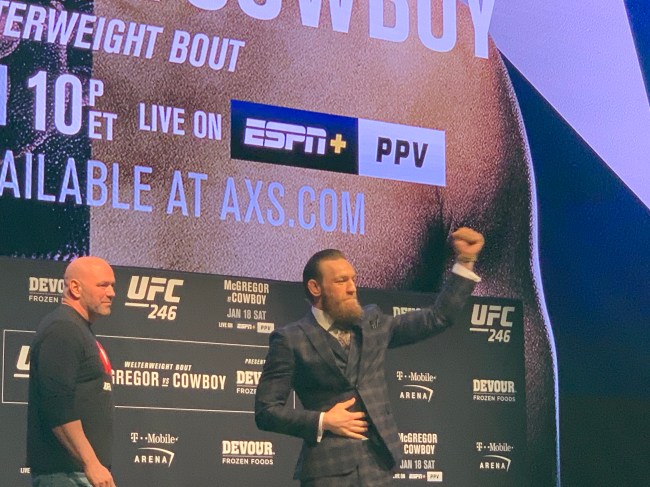 Presented in partnership with Oddschecker US

Gotta throw some money down on Conor McGregor at UFC 246, right? It’ll make the fights that much better, bettor.

Gambling is just sort of embedded in combat sports culture, so if you know the deal from here, head straight for the local sportsbook or a favorite gaming site. But for those who still need a little depth and perspective on how to bet on the UFC 246 fights, take a gander below for some insight on “The Notorious” Conor McGregor vs. Donald “Cowboy” Cerrone odds.

Don’t feel like an absolute idiot if you don’t know how fight odds are handicapped, that’s someone else’s job. But to make money betting on fights, you’re hoping to really pick an underdog with some favorable odds. Or you can parlay bets, where you select a sequence of fights, only to cash out if every result goes your way.

Now take the UFC 246 PPV main card (which airs on ESPN+), starting with the main event. Favorite Conor McGregor is listed at -320, while “Cowboy” Cerrone is a +260 underdog. The odds on McGregor aren’t really that awesome, right? You’d need to lay down $320-dollars in order to make a hundred bucks. The payout isn’t that great, and this is a comeback fight after all.

There’s little doubt that more bets will be placed on McGregor than anyone else on the card. He’s the most famous dude out there, calling it like it’s a sure thing. However, Cerrone is an interesting play because a bet of $100-dollars wins you $260. Nice little cashout, but only go there if you’re hardcore on the “Cowboy” bandwagon and think he’s gonna win the fight. No sense in just throwing money away.

The UFC 246 main event between McGregor and Cerrone has the second widest odds on the entire UFC 246 card. In fact, the only fight with a more lopsided line is the prelim headliner between Maycee Barber, the UFC’s new it girl, and quirky veteran Roxanne Modafferi.

Barber, nicknamed “The Future,” is booming these days. She’s quite the hot commodity, slotted into that prelim headliner on ESPN spot that the UFC usually reserves for developing young stars (think Cody Garbrandt at UFC 202). But at -800, there’s no reason to wager that cash. And even at +500, Modafferi isn’t necessarily the best play. Well, the odds are great and you stand to win a lot betting on the underdog. But Barber is destined for greatness, and this is not a fight she will lose.

Is This All Starting to Make More Sense

Outside of McGregor vs. Cerrone and Barber vs. Modafferi, the only other fights with juicy odds are the PPV opener between Anthony “Showtime” Pettis and Diego Ferreira. Wait. Surely, I’m reading this wrong. Ferreira is a -240 favorite of over Pettis, a former champion, at +200? Now, this is a bet I’d look into.

A winner of five straight, Ferreira is technically the hottest fighter on the UFC 246 PPV card. Not to mention that he trains at Fortis MMA in Dallas, a fight team that is coming off of an impressive 2019 campaign. However, Pettis tends to trade wins and losses, and Ferreira is the kind of fight he usually wins.

Not knocking Ferreira here, but Pettis looks like a good play here. He’s fought on the biggest cards in UFC history, even main eventing a few PPV cards. He knows that stakes, and a loss to an unranked guy like Ferreira just doesn’t sound right.

Another good play, this time on the ESPN prelims, is a lightweight bout between Nasrat Haqparast and Drew Dober. With Haqparast listed as a -280 favorite, and Dober a +240 dog, this bout feels prime for an upset.

Early today at the official UFC 246 weigh ins, Haqparast didn’t look particularly good, needing the black hoop of shame to make weight in the buff. Dober, on the other hand, looked better than he has in a while, and he’s known to retain serious power at lightweight, even after some tough weight cuts.

Putting Together a Parlay

When it comes to bouts with much narrower odds, it’s fun to put together a parlay sequence. It kind of makes your money work for you in some sense.

The UFC 246 co-main event between Holly Holm and Raquel Pennington is a reasonably close fight according to the books, with Holm listed as the -130 favorite, and Pennington very much a live dog at +110. It’s not a huge payout of course (if you put down, a c-note and she wins, you walk away with one ten), but what about tossing Pennington into a parlay? How can you let it ride and turn that fight into a little more cash?

Well, tack it on to a fight or two, like say picking a Pettis-Oleinik-Pennington parlay. To let you understand how it all works, if you would put down $100 on Pettis at +200 and he wins at UFC 246, all of your cash (which is now $300 because you won $200 on Pettis, which is now tacked on to your principle $100) then gets forwarded on to the next fighter, which is Aleksei Oleinik, who is a +105 underdog against Maurice Green.

Oleinik has the experience and skills to tap Green out, and suddenly that $300 becomes $615, which is parlayed on to Pennington. Now, rather than just putting $100 on Pennington to win $110, you’re in a position to walk away with more than $1260 for the same money down. Of course a number of things have to go right.

Prop bets are random bets. They’re specific bets. Nuanced bets. Absurd bets. They’re not as straightforward as who wins and who loses. People are betting on the national anthem and who will land the first punch. Who will carry a national flag. How many times Conor will drop an F bomb, and will “Cowboy” drink Budweiser in his corner. There’s even a bet on Bruce Buffer’s fighter intros, so you can really understand how degenerative a gambling addiction can truly be.

Prop bets aren’t really my thing, to be honest with you, but some people are really into them.

Take a look at these prop bets below.

Some interesting prop bets for McGregor vs. Cowboy were just released by @betonline_ag pic.twitter.com/VhrVGJKcnt

Well, I hope this has been beneficial and education.