What’s At Stake For Conor McGregor? Why He’s Fighting At UFC 246… And We’re Not Talking About The Purse 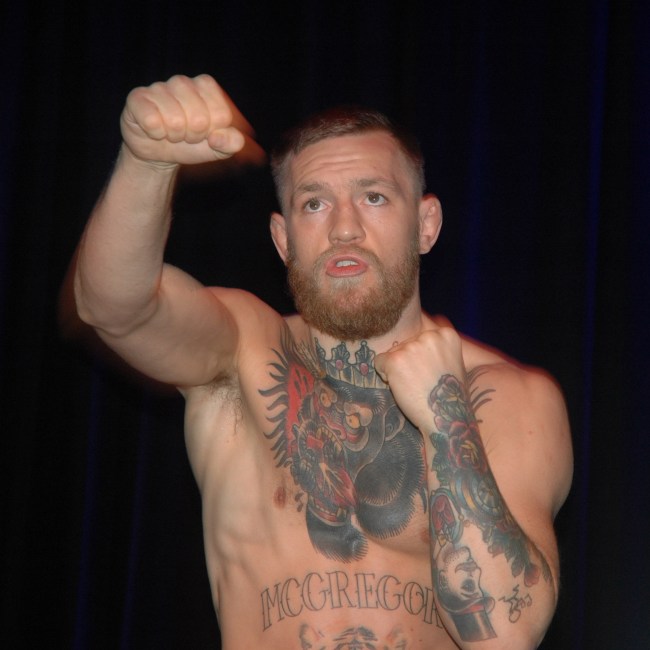 This is not a conversation about money. There will be plenty of those, and they’ll likely hit the eight figure range for Conor McGregor’s UFC 246 comeback fight against Donald “Cowboy” Cerrone.

Rather, this is a conversation about career opportunities, stakes, opponents, matchups, mega fights, all of which depend on McGregor successfully completing his return to the Octagon. Seriously, with so much on the line for McGregor, failure is not an option on January 18 for his UFC comeback.

So, putting aside any specific questions about McGregor’s UFC 246 purse (don’t worry, someone will report that kind of stuff before fight night), here’s a look at what “The Notorious” is really fighting for when he takes on “Cowboy” Cerrone on ESPN+.

In the limited media we’ve seen from McGregor prior to UFC 246, which basically consists of an interview with The MacLife, the former two-division UFC champ champ focused his future sights on a group of welterweights, among them UFC BMF champ Jorge Masvidal and welterweight champ Kamaru Usman.

It’s a brilliant move for McGregor, to be honest. With built-in rivalries against natural foes like Nate Diaz and UFC lightweight champ Khabib Nurmagomedov, it’s smart for “The Notorious” to look for yet another new and lucrative dance partner. Seriously, would the build up to a McGregor vs. Masvidal BMF title fight not be absolutely incredible? It’d be completely ridiculous. And, you’d love it.

Those are also the types of fights that get Hollywood VIPs into the arena and the big mainstream crowds buying Pay Per Views.

Anyway, back to McGregor vs. Masvidal … all of that is off the table without a win against “Cowboy” in the UFC 246 PPV main event on ESPN+. Honestly, the only big fight out there for McGregor, with or without a win at UFC 246, is his trilogy bout against Nate Diaz, after the pair delivered two of the highest selling and most entertaining fights of all time back in 2016.

But with a win … well, with a win, Conor could step right into a UFC lightweight title fight. Couldn’t he?

UFC president Dana White has already expressed interest in a Nurmagomedov vs. McGregor rematch. Why wouldn’t he? The first bout remains the highest selling UFC PPV card of all time. And, at that point, the only fighters ranked higher than McGregor at lightweight would be Justin Gaethje (who is on Conor’s “list”) and Dustin Poirier (who’s already tasted “The Notorious” left hand to the dome), so there’s basically some validity to it (although I’ll dispute that Gaethje remains the rightful next contender after April, but the rules are different with Conor).

Another good fight for Conor McGregor? How about Tony Ferguson?

There’s some natural tension and backstory there, as the two once shared representation through Paradigm Sports Management. It eventually went sour when McGregor moved up to lightweight, a division where Ferguson had long been Paradigm’s star client.

In the years since, Ferguson, the owner of a lightweight record 12-fight win streak, has moved on to the Ballengee Group, and secured a title shot against Nurmagomedov at UFC 249. Would Ferguson vs. McGregor for the UFC title in December not be an absolutely wild affair?

It would; however, the list goes on: Max Holloway, Anthony “Showtime” Pettis (…who also fights on the UFC 246 PPV main card on ESPN+), Tyron Woodley, are all potential suitors for the Conor McGregor sweepstakes. But unless Conor can beat “Cowboy” at UFC 246, he’s not too far away from headlining a Dublin card against Joseph Duffy, if you know what I mean. Wait, whatever happened to “Irish” Joe Duffy?

So that’s the end of the competition portion of this article. But there’s still way more to talk about. McGregor has way more to fight for at UFC 246 than his next fight or a few different UFC and BMF titles. McGregor doesn’t just badly need a win inside the Octagon. He just needs a win in life.

At the rate he’s going, Conor McGregor is in danger of becoming yet another combat casualty, an Icarus who flew too close to the sun type … albeit way richer.

The money McGregor made from fighting Mayweather in 2017 set him up for lifetimes, so it’s understandable that he took the money and ran. But halting the momentum he had at the time completely derailed his career in many ways. Where he was once a well-oiled machine steaming down the tracks, the McGregor train went full on runaway, off the rails after the Mayweather bout, and he’s still yet to truly recapture the magic form of that original 2013-2016 run through the UFC.

And here’s the thing, McGregor is literally one win away from making the whole world believe in him again. That’s how badly he needs this win over Cerrone. It’s not really about the money at this point, and it’s not really about a title. It’s more about can Conor McGregor just win at anything anymore after the dolly incident at UFC 223, after the brawl at the T-Mobile Arena at UFC 229, after the cell phone in Miami, after punching the “old dude” at that bar, after the accusations and suspicions, and whatnot.

And this is what’s really on the line for Conor McGregor when he fights “Cowboy” Cerrone in the UFC 246 PPV main event: it’s about Conor McGregor proving to himself, and to the world, that he’s still the same fighter who charmed the whole world into buying his highest-selling fights in combat sports, boxing, and UFC history, not just because he was a smooth talker, and fantastic showman and personality, but also because he delivered inside the Octagon, giving fans some incredible knockouts and MMA moments.

Conor McGregor returns to action on Saturday, January 18, when he takes on Donald “Cowboy” Cerrone in the UFC 246 PPV main event.