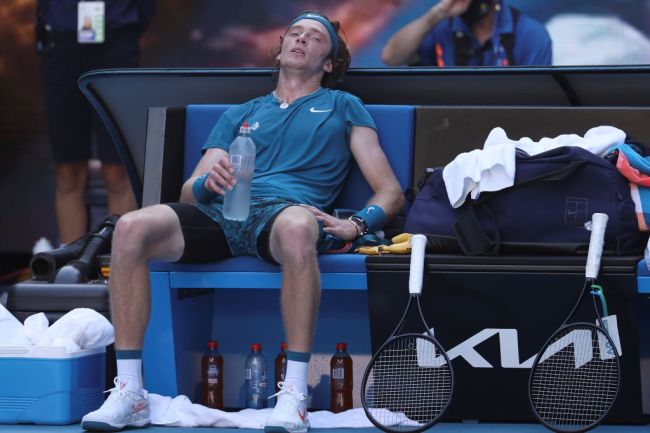 It’s getting down to the final stages of the Australian Open and Andrey Rublev was feeling the heat. Literally. During the No. 7 seed’s quarter-final match with 4-seed Daniil Medvedev on Wednesday, he took advantage of a set break before the third set and hopped in the shower. There was a lengthier-than-usual pause when the ESPN broadcast came back from break and Rublev was not on the court. Moments later, the 23-year-old emerged from the tunnel soaking wet.

Both Russian players battled out of the gate, but the favorite took the first set 7-5. It was an equally as grueling second set and the sixth and seventh games took 16 minutes alone.

What an incredible 43-shot rally from Medvedev and Rublev! 👏 #AusOpen pic.twitter.com/jLqtBLSdkY

The long rallies took everything out of Rublev and — to make matters worse — it was 84 degrees with about 50 percent humidity in Melbourne. He went into the locker room after dropping the second set to cool off. When he came back, his hair was soaking wet and it was clear that Rublev hopped in for a cold rinse.

Medvedev went on to sweep his fellow countryman 7-5, 6-3, 6-2 to advance to the Australian Open semifinals against either Stefanos Tsitsipas or Rafael Nadal. Rublev couldn’t keep up with the pace and tenacity on Wednesday, but he put up a strong showing in the first half of the match and took a literal shower during the match. It was a pretty stupendous move that is not common by any means within the sport.

Nadal lost the 2016 Olympics Bronze Medal Match to Kei Nishikori after the victor (allegedly) took a 12-minute shower break. Nishikori, like Rublev, stopped play between the second and third sets— though the former was off of the court for an egregious amount of time, while the latter was not.

Either way, the shower did not stop Rublev from getting bathed by Medvedev and his 2021 Australian Open is over.