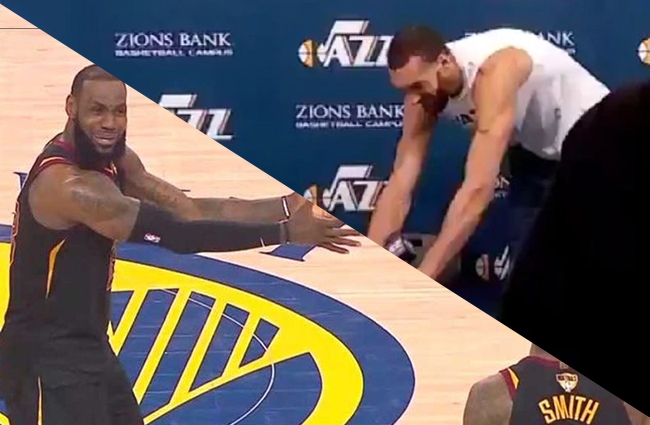 Take a quick look at this.

They have a lot in common too.

Both Gobert and JR are showing a complete lack of awareness. Clearly, Rudy has not been reading his CDC updates while JR hadn’t read the scoreboard. As these are probably the two most moronic moments I can remember from the NBA in the last five years, let’s break down which one is worse.

JR Dribbles Out The Clock

Every time I watch that JR clip, it’s gutting.

I wanted the Cavs to make it a series somehow. We all knew the Warriors were going to run over the Cavs but LeBron went insane in that first game and put down the best finals performance most of us have ever seen.

51 points, 8 rebounds, 8 assists. Dude broke himself for that game.

Do the Cavs have a chance if they take Game 1 on the road? Eh, maybe. I still think the Warriors regroup and win in six, but at least it’s a series.

The look on Lebron’s face as they go to the huddle is heartbreaking. Just go up JR! Like you’re playing 21! Maybe you get blocked to Timbucktu maybe you get fouled! Even if he airballs it, nobody cares. Just throw it at the damn basket!!

No matter how many times you see it—today, tomorrow, whenever—it’s crushing. On top of that, his face when LeBron asks him why he didn’t shoot? He looks like Eli Manning after every single interception: mouth agape, slightly glazed eyes, complete confusion. R.I.P. brain.

There are three ways to guarantee that you contract coronavirus right now: taking communion at mass, picking your nose and eating it after a book signing, and fondling microphones at a press conference.

Rudy Gobert is now the poster child for the cancellation of this NBA season. Patient zero. The entire league shut down thanks to a guy whose arms are longer than his body. And for what? A couple tepid laughs from reporters?

Come on, Rudy! This was a big year!! So many changes in the off-season. Such an open hunt for the title. Zion JUST started to figure out how to use his girth. And now, we’ll never know how it all would have played out. Unless they somehow postpone the season and bring it back in the summer? I don’t see that.

If we’re honest, I think Rudy just accelerated the inevitable. Leagues are going to shut down regardless. But to be the guy who everyone will remember as having started it all? Tough. I know it’s only a myth that AIDs started because some dude piped a monkey. But in a world where that’s true, Rudy Gobert is the monkey-piper of the NBA’s Coronavirus.

In conclusion, while Rudy Gobert may be the face for the spread of the Coronavirus in the NBA and its subsequent shutdown, the league would have shut down regardless. JR Smith, on the other hand, was entirely responsible for changing the history of an NBA Finals.