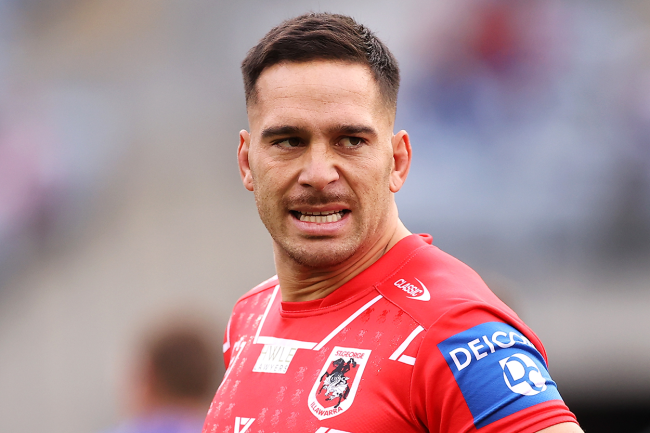 Australian rugby league player Corey Norman has been suspended for eight games and fined about $600. It will also end his season, which has four games left, early.

The reason is rather bizarre.

During a match against the Warrington Wolves on August 11th, the Toulouse Olypique halfback stuck his hand in his opponent’s butt. Seriously.

Video from the incident shows Norman first tackle Oliver Holmes to the ground. Holmes then waits for his teammates to gather near so that he can pass the ball off.

Meanwhile, Norman proceeds to reach his hand around and stick his hand right between the cheeks of Holmes’ buttocks.

Take a look at video of the rugby butt grab incident:

31-year-old Norman, who joined his current team in April after initially announcing his retirement during the offseason, pled not guilty to the offense. However, the tribunal council did not agree with his plea.

Justice Sarah Wright and the two side members, who were both former players, were “entirely satisfied” that the act was intentional. And it sure looked that way.

“The footage of the incident shows a deliberate movement of Corey Norman’s left arm and hand over the top of Oliver Holmes and on to his buttocks,” said the ruling. “At no point does the footage show a grabbing of the shorts to push Oliver Holmes down as described by Corey Norman.

“The footage shows a deliberate placing of Corey Norman’s hands and fingers on the buttocks and coupled with the immediate complaint from Holmes, the reaction of his team-mate Danny Walker and the statement of Holmes to which we have measured regard we are entirely satisfied that this was an intentional placing of a hand between the buttocks of the opposing player and we find the charge proved.”

It certainly seems like this is the right ruling. Norman’s butt grab looked pretty deliberate and uncalled for.

That likely will be how his career comes to an end, which is a wild way to go out.