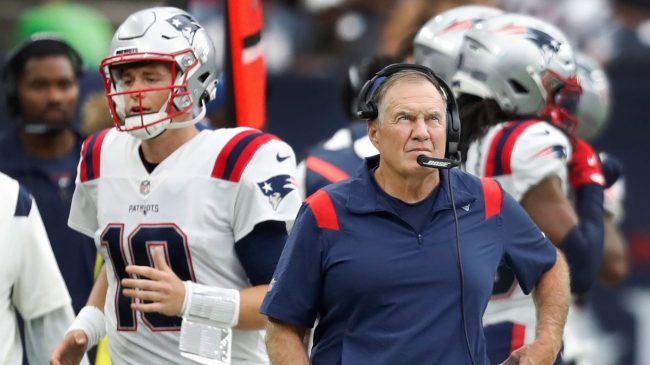 It’s been a weird season for the New England Patriots overall so far. They’ve maintained competitiveness with Bailey Zappe under center. However, rumors are that there is some friction between Mac Jones and the coaching staff right now. It’s an odd situation, as Bill Belichick’s team is usually drama free, for the most part.

Ross Tucker filled in for Dan Patrick on The Dan Patrick Show and received some rumors regarding Mac Jones and the Patriots. According to Albert Breer, the relationship between the second-year quarterback and the organization “has gotten sideways.” Apparently, there have been different opinions on Jones’ injury. Additionally, it sounds like the young quarterback has been questioning the coaching staff’s decisions as well.

"Wait a second, 'why are you hiring a defensive coach as my offensive coordinator?'"

.@AlbertBreer was on the @dpshow and detailed the friction in the relationship.

Pats wanted Mac to get surgery and Mac declined. pic.twitter.com/z7rcUZaYml

It’s an intriguing situation, as drama typically doesn’t coincide with Bill Belichick and New England. Regardless, these are simply rumors for now. Especially considering Mac Jones looked just fine cheering on his teammates on Sunday as Bailey Zappe and the Patriots beat the Cleveland Browns.

Even so, it is notable to point out that Mac Jones openly sought multiple opinions on his ankle injury. It’s not crazy to believe that the Patriots wanted Jones to receive surgery. However, he clearly believed he didn’t need it.

It’ll be interesting to see what transpires moving forward. The Patriots could have a real quarterback controversy on their hands as Bailey Zappe has been surprisingly good. Even though the rumors are building between Mac Jones and New England, Albert Breer does believe that the starting job belongs to him.

This might be something to monitor though. Many can’t help but compare Zappe’s situation to Tom Brady’s start to his career. Not saying that Bailey Zappe will do the same thing, but it’s not like Bill Belichick has never made a drastic quarterback change before.