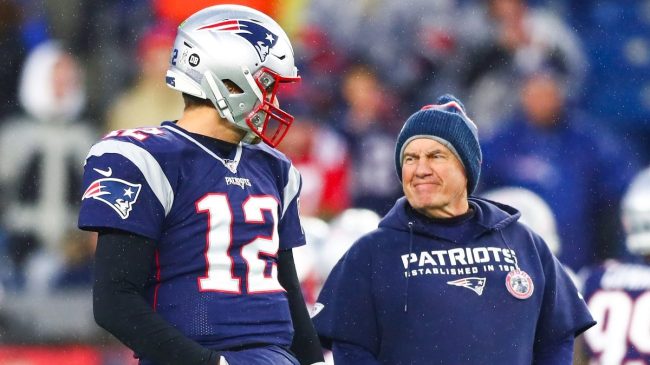 Everybody is aware of the fact that Tom Brady attended Robert Kraft’s wedding. That was mentioned multiple times on Sunday after the Tampa Bay Buccaneers struggled against a bad Pittsburgh Steelers team. However, Bill Belichick just proved he’s more focused than Brady by simply not attending Kraft’s wedding.

According to Pro Football Talk, “Patriots coach Bill Belichick, appearing on WEEI radio, explained on Monday morning that he talked to team owner Robert Kraft about attending Kraft’s surprise wedding on Friday night, but that Belichick decided he had too much going on.”

Meanwhile, Tom Brady skipped out on practice with the Buccaneers to attend the wedding. Had Tampa Bay won the game, then maybe it wouldn’t be a big deal. However, the team looked noticeably sluggish. Especially Brady, which doesn’t happen often.

On the other hand, Bill Belichick led the Patriots to a big win over the Cleveland Browns. The team looked sharp as they earned a much-needed win to get back to .500. As of now, Belichick’s head is in the game much more than Tom Brady’s.

The future Hall of Fame quarterback just hasn’t looked like himself this year. He originally announced his retirement from the league but then surprisingly (or unsurprisingly) came back. Even so, Tom Brady has had an enormous amount of outside noise this season.

Either way, look for Bill Belichick to do everything possible to keep the Patriots competitive. As for the Buccaneers, hopefully, Brady gets back on track, as they’ll need him if they want to truly compete for a Super Bowl.