An MTV Show, A Double Life, And Recruiting Scandals: High School Football’s Most Infamous Coach Is In Big Trouble Once Again 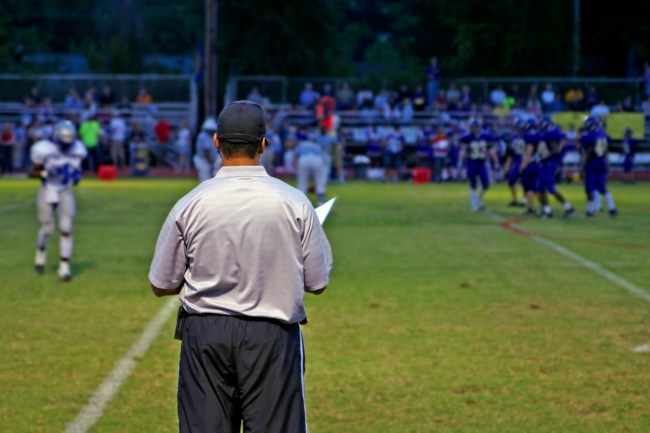 Rush Propst is considered to be the most (in)famous high school football coach in America and his wild, up-and-down career just got even crazier. The Georgia High School Association (GHSA) has placed unprecedented sanctions on Valdosta High School, his current program, that bans the team from the playoffs next season and cites the Propst and Valdosta for a “lack of institutional control.”

This is not the first time that the 63-year-old has been caught up in scandal and his track record of misconduct both on and off the field might be longer than his history of wins and championships. It has been a truly unbelievable career.

For the 2006/2007 MTV fans, you might remember Propst from his days at Hoover High School, where he was the polarizing head figure for the show ‘Two-A-Days.’ The show aired in the 10:30pm ET time slot right after ‘Laguna Beach’ and was essentially a high school ‘Hard Knocks’ that chronicled the lives of the players for Hoover’s highly-rated football team.

High school football in the South is a religion and athletes are considered celebrities, so the show had plenty of drama surrounding the Buccaneers. At the forefront of the gridiron stage was the hard-nosed head coach, who used his televangelist and honeysuckle persona to intimidate and provoke his players into success. He was the hardest of hard-asses and it lead to some pretty amazing quotes that would have gone viral (for good or for bad) in today’s social media era.

Propst won five state championships and 110 games in his nine years at Hoover, but his tenure came to an abrupt ending in 2007 after a myriad of issues arose. First, he got in trouble for allegedly altering players grades so they’d be eligible to suit up for the Bucs, as well as qualify for college scholarships.

Then things got messy. After months of rumors, Hoover’s Board of Education released a report that said Propst, who was married to his high school sweetheart with three children, had an affair with the school administrator who helped to fudge the grades. In addition, he had an entire second family in another part of the state, and allegedly had another affair with a young Hoover teacher while on a school site visit.

For those keeping track at home, that means Propst had a wife and kids, a second “wife and kids,” a girlfriend on the side and was still sleeping around. He resigned from Hoover in October of 2007, divorced his wife in 2008 and married his current wife with whom he has four children not long thereafter. And that’s only the beginning.

Shortly after stepping down in Alabama, Colquitt County High School in Georgia made Propst the state’s highest-paid coach at a whopping $141,000 a year. He amassed 119 wins and two state championships during his decade with the school and had back-to-back undefeated seasons in 2014 and 2015. ESPN documented the “redemption” story on E60:

Things were great on the surface but once again, scandal followed. Propst was suspended for an entire year in 2016 after head-butting a player during the state playoffs, and that was the least of his problems.

In February of 2019, Colquitt County placed Propst on administrative leave and launched an investigation into “personnel issues.” The school subsequently fired him a month later.

Among the most serious allegations, Propst was accused of dispensing “pills” to his players. Colquitt’s report said that he gave a pill to a player, who later seemed lethargic, during halftime of a 2012 game and later promised not to provide any more medication to his athletes. Efforts to eradicate the pill problem failed and Propst was accused of again dispensing (undisclosed) medication during the 2018 season, as well as failing to show up for 21 half or whole days of work without notifying his boss. He also reportedly became enraged when the school’s superintendent told Propst that the team could no longer stay in a hotel the night before a home game.

If that wasn’t enough, outside reports also said that Propst owed nearly $450,000 in state and federal taxes dating back to 2010. Yikes.

The debacle at Colquitt kept Propst out of a high school job in 2019 and he spent the year as a volunteer consultant at the University of Alabama Birmingham. Despite his history of absurdity, winning football games is everything in the south and Propst somehow received his next opportunity with Valdosta High School after one year off. He took over one of the winningest high school football programs in the country in 2020 and, surprise surprise, he’s in hot water again.

Now, 364 days after his most recent hire, his program is being hit with sanctions. The GHSA has levied a $7,500 fine against the school, ordered the Wildcats to forfeit seven wins from last season, banned the team from playing in the 2021 postseason (something that has never happened in Georgia), and already declared a handful of player ineligible for next season. The ban will put the Wildcats out of the postseason for the first time since 2008.

An investigation into the program was the result of comments that Propst made on a secretly-recorded conversation with a former booster on May 16, 2020. The booster, who is known as ‘Nub’ because he only has one arm, recorded the head coach asking for “funny money” to help pay living expenses for families with superstar sons who wanted to move to the city and play for his team.

On the 14-minute call, Propst smears the college football operating system and accused two high-profile programs of paying its players. He may not be wrong, because “Bag Man” culture is likely rampant amongst the FBS level, but it opened up a can of worms that led to where he and Valdosta are today.

The recording hears Propst say that former Alabama head coach Bear Bryant built an illegal slush fund for recruiting “back in the 1960s,” and claims that current Georgia head coach Kirby Smart paid running back Nick Chubb “three $60,000 donations” to return to the Bulldogs for his senior season. Chubb even addressed the allegations.

If i needed money i would have went pro #fakenews

Having implicated some of the nation’s top collegiate coaches and athletes, Propst then goes on to say that while at Hoover, the police department provided him with “$30,000 of drug money” from a narcotics raid in the area. Then at Colquitt, he tells Nub, boosters gave him an additional $4,500 a month on top of his salary, which picked up his cellphone and truck payments as well as part of his mortgage. He discussed all of his previous stops only to circle back and request “at least $10,000 cash” to help bring four- and five-star recruits to Valdosta.

Nub says that he did not leak the tape, but that he did turn it over to Valdosta school officials and GHSA investigators. From there, the GHSA dug deeper into the program, imposed its sanctions and ruled senior wideout Tahj Sanders, senior quarterback Amari Jones, senior running back Jamad Willis and senior linebacker Ty’Li Lewis “ineligible to participate in any GHSA sponsored activity” for one year. Sanders, Willis and Lewis followed Propst from Colquitt County, while Jones relocated from the Atlanta area. Nub revealed that Propst had requested $850 a month to pay the expenses for Jones’ move.

One Wildcat recruit stood out in particular and had already been declared ineligible last season. Five-star quarterback Jake Garcia, who is currently enrolled as a freshman at the University of Miami, moved to Valdosta last summer after California pushed its football season to the spring because of the COVID-19 global pandemic. Garcia’s parents Randy and Yvonne legally separated (college football and recruiting is weird!!) to meet the GHSA’s transfer requirements, but Jake was still ruled ineligible because he and his family hadn’t made a bona fide move. He transferred to Grayson High School after playing only one game with Valdosta and led the Atlanta suburb team to a state championship. Nub also accused Propst of wanting $2,500 a month for Garcia’s family.

The GHSA fined the school $1,000 for each of the five transfers and an additional $2,500 for a “lack of institutional control,” which is believed to be the highest total in state history.

“We’ve got to let the (appeals) process play out, and we respect that process, and hopefully we’ll get to the bottom of this,” Propst said.

On advice of attorneys, Propst declined to defend himself or comment further on the record. Valdosta High School has not commented and is expected to appeal before a four-person board comprised of members of the GHSA’s executive committee. The evidence is certainly not in the favor of the school.

When it’s all said and done, Valdosta knew what it was getting into by giving Propst the job, but the newest scandal surely hit before anyone involved with the hiring process would have expected. Propst’s unimaginable life and career have led him to this point. It was only a matter of time before the next issue arose and if he somehow survives this most recent scandal and remains the head coach, it further proves that winning football games is the only thing that matters.

Rush Propst is considered to be the most (in)famous high school football coach in America and his wild, up-and-down career just got even crazier.