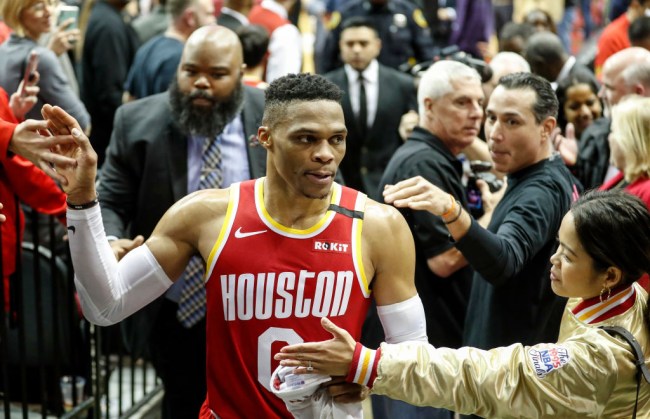 The NBA regular season resumed on Thursday after the All-Star break and oh how great it is to be back.

Russell Westbrook and the Rockets traveled to Golden State to play the Steph Curry and Klay Thompson-less Warriors. While the game wasn’t all that entertaining with the downright awful Warriors still down their two best players, there were plenty of fireworks in the fourth quarter thanks to Westbrook.

Westbrook already picked up a technical foul earlier in the game and then got ejected from the game for picking up a second technical after catching Damion Lee with an elbow.

Then, in typical fashion, Westbrook took his sweet ass time to leave the floor. First, he walked over to the Golden State bench, stared down both Andrew Wiggins and Klay Thompson and exchanged some words before security had to step in and move him aside.

On the way from the bench, Westbrook decided to get even more dramatic by running into Kevon Looney and turning back at him accusing him of getting in his way.

All in all, the temper tantrum lasted more than 90 seconds. It took him over a minute and a half just to make his way back to the Houston bench.

Westbrook tells Damion Lee "What you gonna do?"
Gets ejected after 2nd tech.

The Rockets went on to win the game by 30 points, 135-105 handing the Warriors their 44th loss of the season. Houston, on the other hand, improved to 35-20 on the year with the victory.

Westbrook easily could have been sitting on the bench at this given point with Houston dominating late, but he was clearly chasing a triple-double. He finished the night with 21 points, 10 assists, and five rebounds.