We Asked Russell Westbrook An Important Question: In-N-Out Vs. Whataburger? 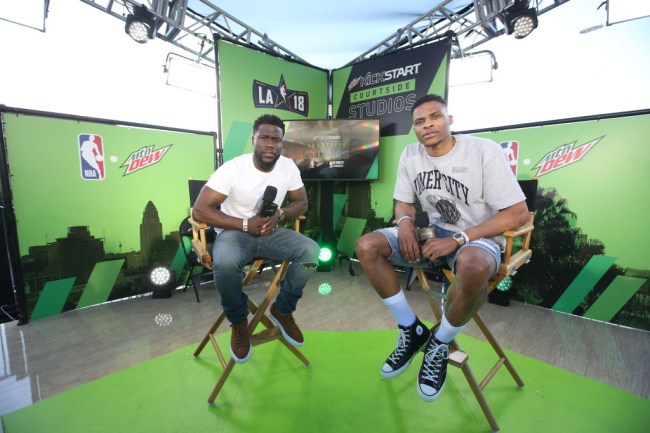 There are few debates in 2018 America quite like the debate of In-N-Out vs. Whataburger. It’s the ultimate fast food burger debate, with disciples  from two very different parts of the United States (West Coast vs Texas/Oklahoma/Florida) evangelizing their favorite burger chain. Thanks to feverish regional loyalty, it’s far more intense than In-N-Out vs. Five Guys and way less coastal elitist than In-N-Out vs. Shake Shack.

This puts NBA superstar Russell Westbrook is an interesting spot. Born-and-raised in Los Angeles around In-N-Out, yet sports royalty in Oklahoma City, a metro area that boasts over 17 Whataburger locations alone. Delicious Whataburger Patty Melts (…with chilis and that wonderful Creamy Pepper sauce) or the classic Double-Double animal style from In-N-Out?

Back west for All-Star Weekend in Los Angeles, I got a chance to ask Westbrook this crucial question at MTN DEW Kickstart’s Courtside Studios, where Russ and Kevin Hart clowned each other on Instagram and Facebook Live before the Dunk contest.

So… In-N-Out vs. Whataburger?

We asked @russwest44 the most important question of his career: In-N-Out vs Whataburger? 🍔🏀🍔 pic.twitter.com/tXtSxAcoof

Not a surprise from someone who grew up in the heart of In-N-Out country. Here’s his order: A double-double with fries, occasionally animal style. In a very Russell Westbrook way, he also emphatically added “with a strawberry shake,” noting just how important it is to the In-N-Out experience.

That answer stings for OKC fans, but what does he care? He already signed a $205M contract extension. There’s plenty of time for double-doubles in retirement.

Here are a couple more questions from our conversation at MTN DEW Kickstart’s Courtside Studios:

We asked @russwest44 about his mustache over NBA All-Star Weekend… pic.twitter.com/2J4Rl3v0Zr

.@russwest44 on being back in LA for the #NBAAllStar break….. pic.twitter.com/QfCqQFxdQM