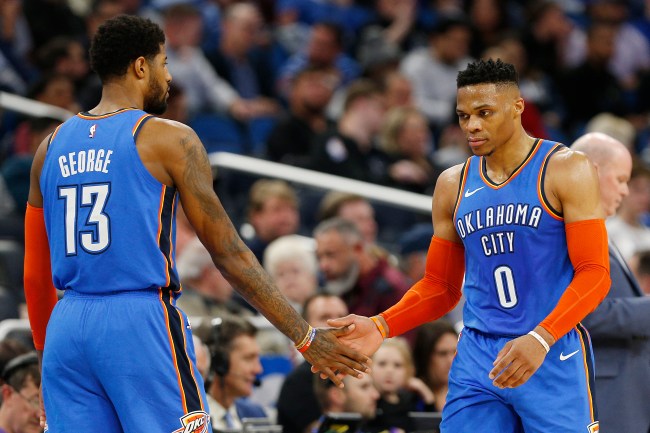 Over the weekend the OKC Thunder shocked the NBA world when they traded Paul George to the LA Clippers.

Apparently, Paul George had requested a trade after Kawhi Leonard recruited him last week to join him in L.A.

After the Clippers met with Leonard for approximately three hours at head coach Doc Rivers’ house in Malibu on Monday night, both sides went to work to make that happen. At the same time he was meeting with the Los Angeles Lakers and Toronto Raptors this week, Leonard was meeting, calling and texting with George, trying to convince him to find a way out of Oklahoma City.

For George to join Leonard with the Clippers, however, he’d have to ask for a trade from Oklahoma City — and that wasn’t going to be pleasant, considering the way the franchise had treated him in the two seasons he’d played there and the bonds that he’d formed.

But George felt like it was a once-in-a-lifetime opportunity, to play at home in L.A. alongside a generational talent like Leonard.

According to a report from The Athletic’s Shams Charania, teams around the league were aware that there was some “discontent” between George and Russell Westbrook.

On Sunday, Kevin Durant’s close friend and brand ambassador Randy Williams blasted Westbrook for being a bad teammate and claims that no one wants to play alongside Russ.

Kendrick Perkins, who played with both Durant and Westbrook, fired back at Williams for calling out Russ on Instagram.

I just read what Randy Williams wrote about Russ and that’s very disturbing to me! Man really went at Russ like that! That’s WEAK my G! KD needs to check his People! Straight Up! Lost all respect for you Homie!!!!