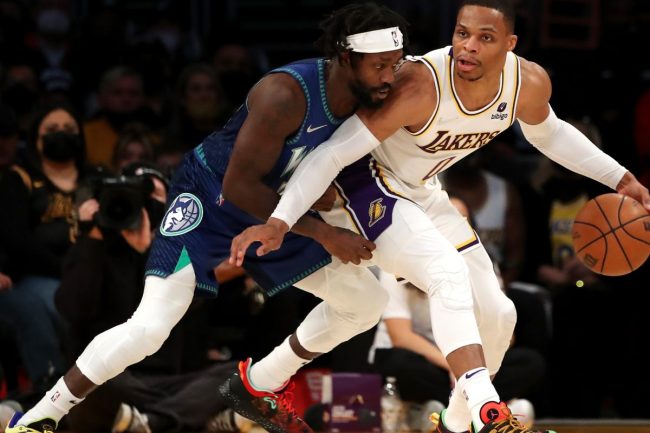 An old clip of Russell Westbook bashing Pat Bev is going viral after the Lakers traded for the guard on Wednesday. The pair will now be teammates in Los Angeles.

The video from 2019 shows Russ trolling Beverley on his “defense” after then-teammate James Harden put up 47 points on the point guard.

Pat Bev is known for being a menace on the defensive side of the ball, but Westbrook thinks he’s got everyone fooled. Here’s what he had to say in that interview.

“Pat Bev trick y’all, man, like he playing defense. He don’t guard nobody, man. It’s just running around, doing nothing. As you see what happened tonight – 47. All that commotion to get 47.”

Pat Bev fired back at those comments last season after seeing Westbrook and the Lakers struggle. He called the Laker guard out by saying that he was the “Real Magician,” not vice versa.

“I remember when somebody said all I do is run around and I trick y’all. Well my boy is The Real Magician this year.”

Los Angeles would miss the playoffs in 2022 while the Timberwolves advanced past the play-in round to battle the Grizzlies. Minnesota would lose a hard-fought series.

Now, Beverley is trying to bring that attitude to LA. He seems excited about his chance to don the purple and gold.

That may be the case, but he and Russ will likely need to iron some things out this offseason. If Westbrook and Pat Bev can get along, the Lakers might just field a squad that can get back to the NBA Finals.