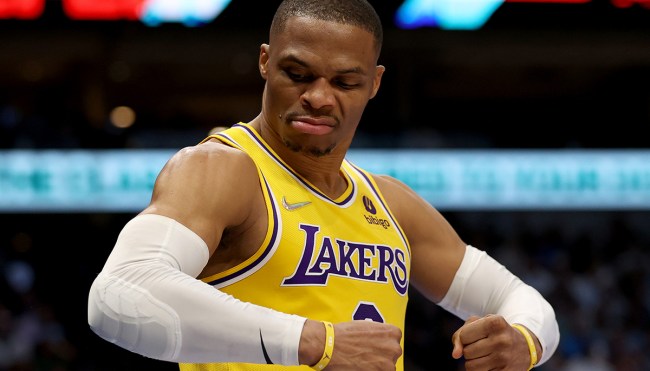 Over the course of the 982 games he’s played in the NBA, Russell Westbrook has put up some pretty jaw-dropping stats on his way to racking up nine All-Star Game appearances and an MVP award while also passing Oscar Robinson for the most triple-doubles in the history of the league.

There’s no doubt Westbrook possesses a ton of talent, but he’s also been the target of plenty of criticism from fans as well as his fellow players over a somewhat paradoxically selfish playing style that’s resulted in him making some questionable decisions that have cost his team.

It’s obviously hard to rack up as many triple-doubles as Westbrook has without routinely dishing the rock to your teammates for assists, but his tendency to chase that particular stat played a role in one of the most dubious streaks in NBA history—one that finally came to an end on Tuesday night.

Heading into the Lakers’ contest against the Kings, Westbrook had managed to post at least one turnover in 407 consecutive games, which ESPN reports was the longest recorded streak since the league started keeping tabs on that particular statistic in 1977. However, the guard was able to snap it by ending the game against Sacramento with a clean sheet in that particular category.

It was the first time since March 14, 2016 that he did not record a turnover in a game.

That snaps a 407-game streak with a turnover, which was the longest since turnover tracking started in 1977-78. pic.twitter.com/OaN0f8Lxjm

I can only hope someone sends him a tasteful Edible Arrangement to commemorate the occasion.