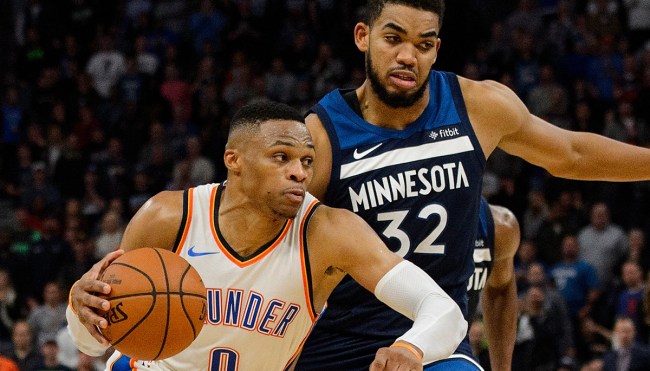 Your standard “Head Coach Press Conference” bingo card is littered with clichés like “There’s no ‘i’ in ‘team'” and “There’s no such thing as an ugly win,” but even the most casual sports fan knows those oft-repeated platitudes are rarely reflected in the performance of the players they oversee.

Sure, there may be no “i” in “team,” but there are four of them in the “individual statistics” that many players focus on to a point where Lonzo Ball was recently lauded with praise for attempting a long-range and (largely meaningless) buzzer-beater in favor of holding onto the rock to preserve his three-point percentage.

On the other side of the coin, you have guys like Russell Westbrook, a man who is both undeniably talented and undeniably obsessed with his personal stats to a point where he once blocked his own teammate in what probably wasn’t a conscious attempt to boost his rebound totals but sure came off looking like one.

Westbrook’s long and well-documented focus on his own achievements has worked out pretty well for him over the years, as the nine-time All-Star and 2017 MVP winner passed Oscar Robinson for the most triple-doubles in NBA history last season. However, there is one fairly noticeable gap in his résumé: the lack of the championship he’s been unable to secure.

On Monday, Westbrook’s borderline selfish playing style became a topic of discussion during a chat between Karl-Anthony Towns and Twitch streamer Adin Ross when the latter pressed the former for his opinion on the Lakers guard after KAT expressed his disdain for players who chase stats.

Karl Anthony Towns when asked what he thinks about Russell Westbrook:

“He definitely gets stats, he chases stats” 💀💀 pic.twitter.com/5CIlMgUFTH

While it’s obvious Towns didn’t mean to come across as disrespectful, it’s pretty clear he and Westbrook have some major philosophical differences based on what he had to say:

“He definitely gets stats. He chases stats. But I think he’s a hell of a player, though.

I’m sure NBA fans and members of the basketball media will interpret KAT’s comments rationally and reasonably and there won’t be any drama whatsoever as a result of that clip.