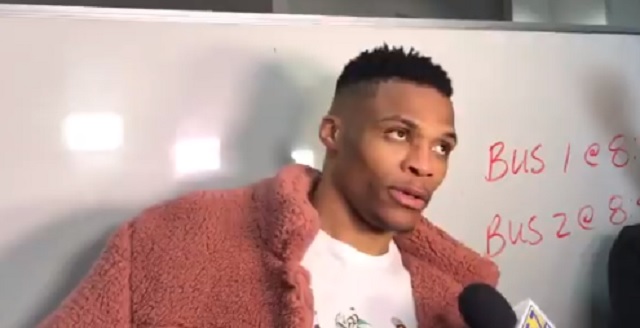 After the game, Westbrook was asked his thoughts on if he thought Zaza fell on him intentionally or if it was an accident.

Russell Westbrook on Zaza Pachulia falling on him, and asked if he’s a dirty player: “Yeah. For sure.” pic.twitter.com/w9ZH0AwVP1

Westbrook: What do you think what happened?

Reporter: He fell on your legs?

Westbrook: Don’t ask me a dumb question you know the answer to.

Reporter: Was it intentional?

Westbrook: Obviously it was intentional, don’t ask me a dumb question. Nobody touched him and he fell over my leg tried to hurt me but hey that’s how it goes

Reporter: Is that something the NBA should look at?

Westbrook: Hey man they’ll see it and they’ll look at

Reporter: You’ve had a couple of run-ins with Zaza, do you think he’s a dirty player?

Westbrook: Yeah for sure.

Westbrook wasn’t the only one to call out Pachulia. Here is Kyrie Irving commenting about the play in an Instagram post.

Kyrie Irving has thoughts on Pachulia falling on Westbrook’s leg: “that s*** is ridiculous” pic.twitter.com/fPJayhbzT4

The league needs to take a hard look at Zaza before he goes out there and ends someone’s career with a dirty play like the one he put on Westbrook tonight.