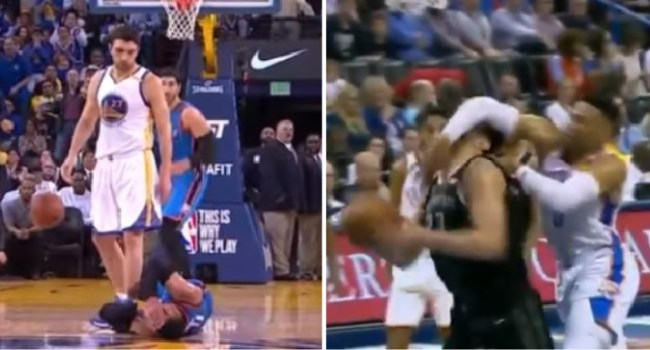 During a Warriors-Thunder game back in January 2017 ZaZa Pachulia infamously stood over Russell Westbrook after a hard foul.

During the post-game interview Westbrook vowed to get ZaZa’s “ass back” for disrespecting him.

Fast forward to tonight where Westbrook finally got his revenge on ZaZa.

Watch as Westbrook gets called for a flagrant 1 for delivering a big hit on ZaZa during tonight’s Pistons-Thunder game.

Two years ago, you’ll recall, after Pachulia fouled Westbrook hard in Oakland, Westbrook said, “I’m gonna get his ass back, straight up.”

Russell Westbrook got a Flagrant 1 for this hard foul on Zaza Pachulia. pic.twitter.com/cPcR2xwHV7

Russell Westbrook gets the Flagrant 1 for this foul on Zaza Pachulia.

NBA twitter rejoiced after Westbrook was able to get ZaZa back.

Oh yes, Russell Westbrook got Zaza in the end. pic.twitter.com/e13hHmGisK

Brody said he was gone get his ass back ✔️ @russwest44 https://t.co/gpoEvz4nZS

Zaza deserves it and more