Russell Wilson Dropped Over $150,000 On Unique Gifts To His Offensive Linemen After Signing Record Extension 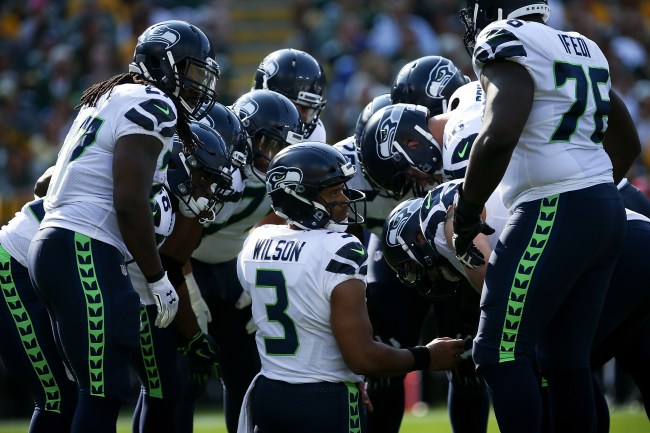 Russell Wilson is a very, very rich man — not that he wasn’t already, obviously. After putting the pressure on the Seattle Seahawks last week to get a new contract extension done by April 15, the team stepped to the plate and handed the Super Bowl-winning quarterback the largest deal in NFL history, giving Wilson $140 million over four years. Rather than spend all that money on himself, though, Wilson decided to at least pay it forward by gifting something pretty unique for each one of his 13 offensive lineman.

No, Russell Wilson didn’t go out and drop thousands on jewelry for the big behemoths who protect him, or spend on a fancy dinner, but, instead, did something that should grow and grow over time: Amazon stock. That’s right, Wilson — who said that he learned some keen business advice and life lessons from former Seahawks owner Paul Allen before Allen passed away — spent about $156,000 total on stock in the online retailer, giving each player $12,000 worth of stock, according to TMZ, with Wilson giving a letter to each teammate to detail the decision.

“Each player got a letter with the stock gift explaining why #3 hooked them up.

“Every Sunday we go to battle together,” Wilson wrote … “You sacrifice your physical and mental well-being to protect me, which in turn allows me to provide and care for my family.”

“This does not go unnoticed and it is never forgotten.”

Russell says he wants to help his teammates prepare for life after football and believes stock in Amazon will help these players achieve their dreams.

“When I sat down to think of ways to honor your dedication a dozen different ideas came to mind. Some were flashy, some were cool, but I wanted to give you something that had a lasting impact. Something that would affect the lives of you, your family, and your children.”

“You have invested in my life … this is my investment into yours.”

You’ve got to admit, that’s a pretty badass gift, especially when considering Amazon’s stock price has risen year-over-year since 2014, going from $303/share on this date five years ago, with it currently sitting at $1,887/share today. If Russell Wilson’s teammates are smart and just let that stock continue to rise, they could see some big benefits down the road after their playing careers are over.

This is a stand up move by Russell Wilson. Not only smart to reward and thank the big fellas who will be blocking for him, but wise in the fact that, as mentioned, the owned stock could grow big time and come in handy for the pro athletes once their NFL days are done. There’s no doubt that this has to mean more than some expensive dinner out on the town would have.