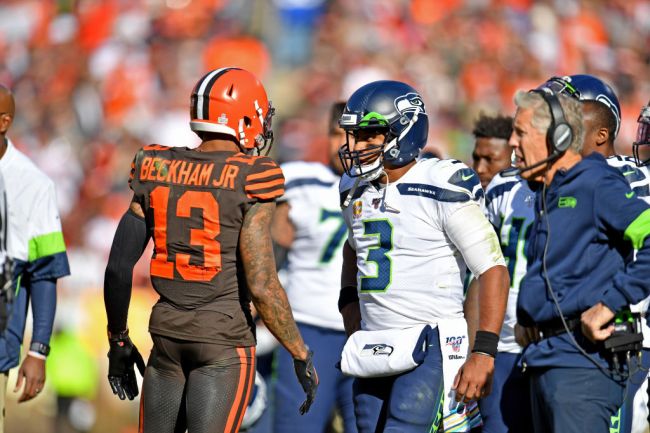 It appears that the Seattle Seahawks are in prime position to sign Odell Beckham Jr next week.

On Sunday night, it was reported that Beckham preferred to sign with the Seahawks but is also considering the Saints and the Niners.

Florio reporting tonight Beckham hopes not to get claimed and wants to sign with Saints, 49ers or Seahawks and that he "prefers'' Seattle. https://t.co/LIrZj0lJXP

According to USA Today’s Mike Jones, Wilson is urging the Seahawks to sign Beckham.

The Seahawks have shown strong interest in acquiring the wide receiver, the person said. Quarterback Russell Wilson has urged Seahawks brass for a Beckham signing, and in recent days, team officials have done extensive research on the wideout.

Beckham would prefer to play for a contender and alongside a veteran quarterback.

Beckham would first have to clear waivers before a team can sign him, but considering how much money he would be owed if claimed, it’s likely that he’s going to become a free agent on Tuesday.

This would seem to decrease the chances that a team will claim Odell Beckham Jr. off waivers. But Kyle Shanahan seemed to send a message that he is interested. (If Beckham goes unclaimed, can he get termination pay from Browns and double-dip w/ another team?) https://t.co/hty0cHpqUy