Russell Wilson’s Typical Day And Diet Sound About As Exciting, And Exhausting, As You’d Expect 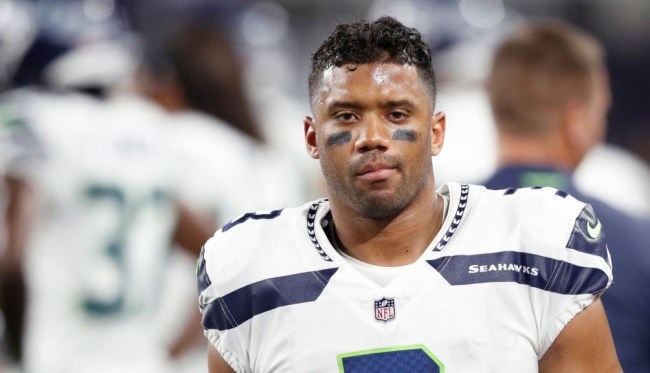 Seattle Seahawks quarterback Russell Wilson was undoubtedly one of the biggest surprises to come out of the 2012 NFL Draft. Drafted by the Seattle Seahawks with the 12th pick in the third round (75th overall), no one expected him to do much in the NFL. Turns out pretty much everyone was wrong.

Now in his seventh season with Seattle, Wilson tied Peyton Manning’s record for most passing touchdowns by a rookie, was named NFL Rookie of the Year, won Super Bowl XLVIII, lost Super Bowl XLIX, and won more games than any other NFL quarterback in his first six seasons in the league.

Oh yeah, he’s also married to and has two kids with singer and songwriter Ciara.

So how does one go from playing minor league baseball for the Tri-City Dust Devils in 2010 and the Asheville Tourists in 2011 to, at one point, being the second highest paid player in the NFL?

To find out, GQ magazine recently had a conversation with Wilson in which he shared his typical day, diet, sleep habits, how long he wants to keep playing, and more.

His response to being asked what a typical day looks like for him made me tired just reading it.

I usually get up pretty early in the morning — during the season, I typically wake up around 5 A.M. By 5:30 or so, I’m doing a hot-and-cold-tub contrast situation, and by 6:30 I’ve got mobility work and yoga with my movement specialist. I have a quick breakfast around 7:00 A.M. and sometimes do a light lift after that.

We’re in meetings from 8:00 A.M. until the middle of the day. I’ll hit up some more shoulder activation before practice, which goes from 1:00 to 3:30 P.M. I’ll watch film afterward, and then head home around 7. I’ll spend about an hour and a half with my family, and then get a massage — a deep tissue massage for stress release and all that — with my specialist. And then finally, there’s sleep.

So what kind of fuel, i.e. food, does one need to maintain a schedule such as that? Wilson says he tries to eat organic, whole nutrition-type foods.

I look for an adequate balance of protein and carbs. I stay away from sugar. I’m not an “I never eat gluten” type of person, but I try to be smart about what I’m doing.

I think one of the biggest things is hydration. Just tons and tons of water. God created our bodies with 70 percent water, so it’s critical to drink up to make sure you’re feeling right. [Ed. note: Close.] Andrea makes everything from scratch, and she uses really clean, fresh, nutritionally-dense ingredients.

Breakfast may look like oatmeal and almond butter. Maybe a protein shake as a mid-morning snack, with some fruit—a one-to-one ratio of carbs and protein. Lunch consists of chicken, rice, and a green vegetable. After practice, I try to have another protein shake. For dinner, good proteins: salmon or steak or chicken, and vegetables. If I get really hungry at night, I’m in luck, because Andrea cuts up some great fruits for us.

Wilson added, “I want to play until I’m 45 years old. So how do I optimize all of that? When I was 26, I really started investing in all of this, because I knew I wanted to be even better 20 years later.”

Read the entire interview over at GQ.com.