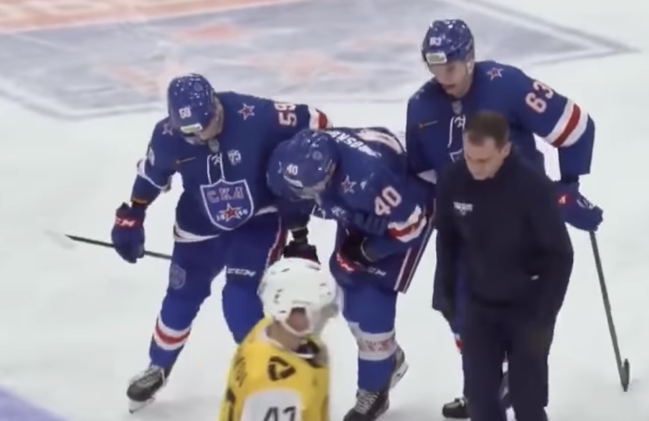 There are two types of people who are built different— Russians and hockey players. When you combine the two, you get a being that is simply invincible.

Andrei Proskurnin is one of those people.

Proskurnin, who was back on defense, wore a close-range wrister to the lower body. He was clearly in pain from the shot but stood back up and limped out to the boards to mark his man.

At that point, the opponent ripped a slapshot toward the net. Proskurnin just so happened to be in the right place at the right time and took the puck to the midsection.

He bent over at the waist and likely would have gone down, but the play continued and Proskurnin had a job to do. Unfortunately, he did it too well.

After following his opponent out to center ice, Proskurnin was on the receiving end of a third shot in the sequence. No. 74 in yellow reared back with urgency and unloaded another slapshot directly at the man who just wore two in a row.

Although he was successful in keeping the puck out of his team’s zone and the net, it came at a price. Proskernin had to be helped off of the ice by two of his teammates.

Look at it all go down in real time:

Let this be a reminder not to mess with Russians or hockey players, and especially not Russian hockey players. What an absolute animal!