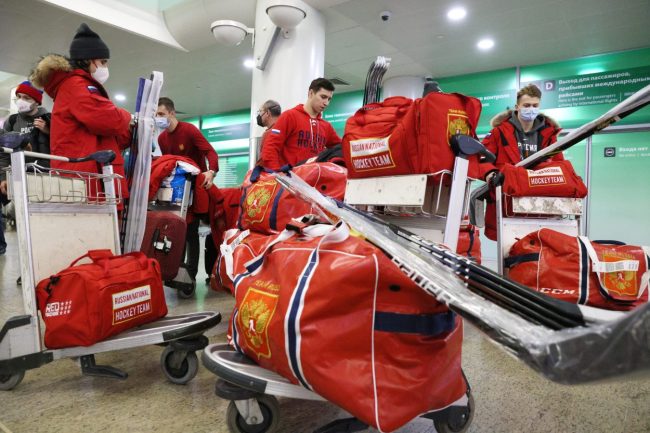 Due to COVID-19 concerns, the 2022 World Junior Ice Hockey Championships was cancelled late last week. On the way home from the event, Russia’s hockey team reportedly went full Russia and had to be removed from their plane.

On Friday night, New Year’s Eve, the Russians boarded a flight that was to depart from Calgary to Frankfurt. However, it was delayed by nearly two hours and the team didn’t get to takeoff.

According to multiple eyewitnesses, Russia’s players and coaches sat in the back of the flight. Apparently, a few of them were drunk, many refused to wear masks, and some of them tried to smoke cigarettes— inside, on the plane.

Two hours late so far on Calgary to Frankfurt flight. The Russian Juniors team was in back, trying to smoke cigarettes, not wearing masks, not listening to attendants. Cops swarmed the plane. We all had to get off while they and their luggage were removed.

We were also on this flight, in business class. Russian coach was trying to vape in his seat, wouldn’t wear his mask, and then he played Russian rock music full blast on his phone. What a way to spend NYE, amirite?

As a result of the combination of factors, and refusing to listen to the flight attendants, police swarmed the plane and escorted the team off of the flight. All of their luggage was removed and Russia was forced to reconsider their travel plans.

I walked past them waiting to get back on a flight pic.twitter.com/pNuHBldRgA

In a statement, the police department said that its Airport Unit officers responded to reports of a disturbance at 5:45pm on Friday. It did not say who or what caused the disturbance, but the department has since confirmed that the team was removed.

Russia also confirmed the report, adding that the Czech Republic team was also asked to deplane.

“The team of the Czech Republic and Russia was removed from the flight for violating the mask regime. Very strict rules,” Russian coach Sergei Zubov told Russian newspaper Izvestia.

However, Czech team manager Otakar Cerny said that his team was not involved with the unruly behavior. He said that the Czechs were likely coupled in with the Russians because they were wearing similar grey sweatshirts.

“And practically only for that reason, they threw us into the same bag as the Russians and told us that the entire Czech and Russian expedition could no longer board the plane,” Cerny told Czech media. “Air Canada representatives apologized to us and at their expense arranged a hotel and a flight to Frankfurt at the same time a day later. They also assured us that we would not fly the same flight as the Russian hockey players.”

Team Finland was also on the flight but was allowed to remain on board.

Russia is reportedly denying the incident.

Czech NFL reporter Roman Blaha reported on the aftermath. He claims that the Russian media is pointing fingers back at the Czechs and Finland.

Reported by multiple sources in Czech Republic and in Canada as well. In the meantime, Russian propaganda reporting they did nothing wrong, got kicked off the plane only for coach’s cigarette. Saying Czechs and Finns were drunk. Completely false. Russian bullshit. 4/4

He also says that the Russians’ unruly behavior did not stop once they were deplaned.

“Czech players spent hours before the flight shopping, buying Canadian souvenirs, calling their families, while arrogant Russians drank in the bars, violating all of the COVID restrictions.”

A passenger on-board the Air Canada flight said that is also how she understood the situation.

This is also how we understood the situation, too.

She also said that the delay was more than three hours.

This was not the first time that this has happened.

In 2011, Team Russia won the World Junior Championship and proceeded to go on a bender. When the team was trying to leave, 30 members of the Russian contingent were asked to get off of a Delta flight for being unruly.

After getting tossed from the flight, players and managers spent the day at a hotel, where a front desk clerk said they were “sleeping it off.” Russia, of course, refuted Delta’s claim.

The team’s head coach said at the time that his team’s members, who were all under 20 years of age, celebrated in the locker room with some champagne, but nothing stronger. However, players were later seen partying and drinking back at the bar of their hotel.

“They were definitely intoxicated, that’s for sure,” said bus driver Curtis Hall, who drove the Russians to the hotel, told the Buffalo News. “They were so drunk they had to carry a couple of the guys onto the bus.”

Russia, like this year, said that did not occur. But it did. We all know it did. Both times.

Russia is going to Russia.