Ryan Clark Is Absolutely Right About The Pressure On Matt Stafford 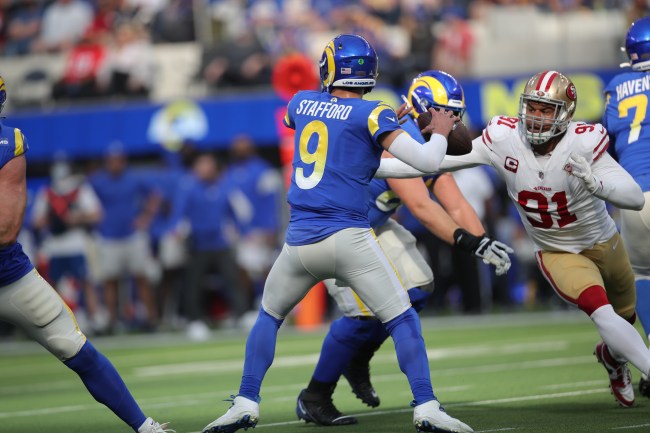 Matt Stafford spent a lot of his career putting up numbers for bad Detroit Lions teams. Some believed that his teammates were the only thing holding him back from playoff success. Now it’s time for him to prove it.

That’s the sentiment Ryan Clark expressed on “Get Up” this morning.

.@Realrclark25 says Matthew Stafford is under more pressure than any other QB in the playoffs.

"This is time for Matthew Stafford to rewrite his entire career … change the perception of who he's been as a player for over a decade. … It's put up or shut up." pic.twitter.com/RpG42LdAey

Clark is absolutely right here. Matt Stafford only made it to the playoffs 3 times in 12 years as a member of the Detroit Lions and didn’t win a single playoff game. He was given a pass because of his number and his team.

That excuse is gone now. Matt Stafford has 3 teammates who were first team All-Pro this season. He took over a team that made the playoffs last season. He was supposed to be an improvement over Jared Goff. A loss to the Cardinals would make it really difficult to argue that he actually improved anything.

All of this pressure really couldn’t come at a worse time for Stafford. He hasn’t been particularly impressive recently. Over the last 3 weeks, Stafford has thrown 6 touchdowns and 7 interceptions in spite of that fact that he played a pair of vulnerable defenses in the Minnesota Vikings and Baltimore Ravens.

He also faced a tougher defense in that stretch in the form of the San Francisco 49ers. The Rams lost that game. The Arizona Cardinals defense has been just as tough as the 49ers. If Stafford falls short in this game, the Rams are going to have a tough time getting past the Cardinals.

If Matt Stafford falls short on Monday, his legacy is going to take a major hit. He’s going to need to be better than he has been recently or the Jared Goff trade could start to look pretty bad for the LA Rams.