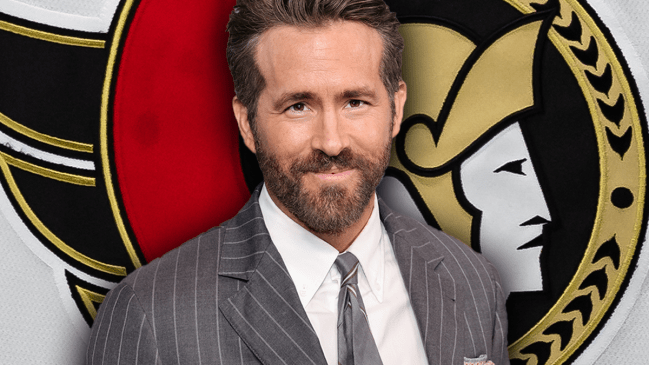 The first year of the current decade was home to an impossible number of unforeseen developments no one could have possibly been prepared to mark on their “2020 Bingo Card.”

That includes “Ryan Reynolds and Rob McElhenney Partner Up To Purchase A Welsh Soccer Club,” which unfolded around two years ago after the Canadian actor and It’s Always Sunny in Philadelphia star decided to drop $2.5 million to become the proud new owners of Wrexham A.F.C.

The two men chronicled the trials and tribulations of buying a soccer team sight unseen in the documentary series Welcome to Wrexham, and while it’s undoubtedly a stressful financial venture (and one that Reynolds previously joked wife Blake Lively was initially less than thrilled with), it appears the man who reinvented his career with the help of Deadpool has caught the Sports Owner Bug.

Earlier this month, a report surfaced that suggested Reynolds was interested in growing his portfolio by adding the Ottawa Senators into the fold shortly before the NHL franchise was officially put up for sale in the wake of the death of former owner Eugene Melnyk.

Now, Reynolds himself has confirmed the team has caught his eye—but he also admitted he’s going to need some help if he wants the acquisition to come to fruition.

On Monday, Reynolds sat down next to Jimmy Fallon on The Tonight Show and acknowledged the veracity of the aforementioned report.

.@VancityReynolds addresses the rumors that he is interested in buying the @NHL @Senators. 👀 #FallonTonight pic.twitter.com/oMgaM08NXy

The Vancouver native may have Movie Star Money, but he doesn’t have Studio Executive Who Decides How Much Money Movies Stars Get Money. As a result, he admitted he’s going to need an assist, saying:

“It’s very expensive, so I need to partner with, you know, really deep pockets.

It’s called a ‘consortium’ when you form a group together to buy an entity, and it’s such a fancy way of saying I need a sugar mommy or a sugar daddy.”

Experts estimate the Senators will ultimately sell for around $775 million, so it’s safe to assume Reynolds (who has an estimated net worth of $150 million) will not be the primary investor.

With that said, he’s repeatedly proven he’s a somewhat invaluable asset to have when you’re in need of a brand ambassador, so it seems any sugar mommies or daddies out there with interest in an NHL team would be wise to include him in a deal.