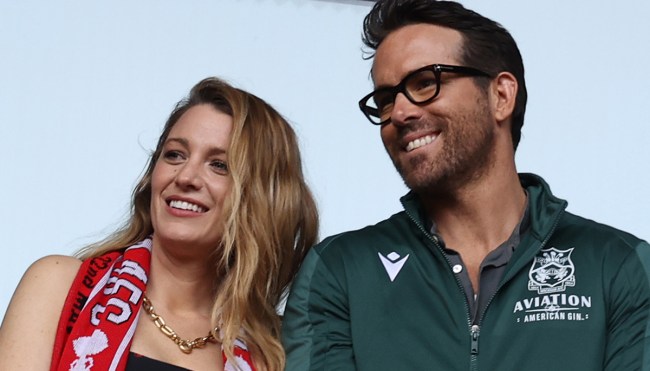 Most people in a long-term relationship have some sort of agreement to talk to their partner before pulling the trigger on the kind of major purchases that would likely result in the other person assuming someone had managed to hack into their bank account if they didn’t get a heads up beforehand.

Of course, plenty of people have adopted the mindset that seeking forgiveness is easier than asking for permission; to use some common (albeit trite) examples, there are a lot of guys who prioritize the immediate satisfaction that comes with buying a new set of golf clubs or a fly fishing rod over the awkwardness of the discussion that ensues after their significant other utters the fateful words, “Is that new?”

When you consider Ryan Reynolds has an estimated net worth of $150 million on top of the $30 million his wife Blake Lively has reportedly managed to accrue, it’s safe to assume he has a bit more leeway when it comes to the things he decides to buy.

However, it would appear there is at least one acquisition that managed to land him in a bit of hot water: Wrexham A.F.C., the Welsh soccer team he decided to buy in 2020 along with It’s Always Sunny in Philadelphia star Rob McElhenney to spark the saga that serves as the basis of an upcoming documentary series.

Welcome to Wrexham was one of the topics Reynolds addressed when he sat down with his fellow co-owner, who was tapped to fill in for the titular host of Jimmy Kimmel Live on Tuesday.

During the segment, the two chatted about the friendship that began when Reynolds slid into McElhenney’s DMs to compliment him on a surreal dance Mac performed on an episode of It’s Always Sunny, a relationship that ultimately flourished to a point where they agreed to buy the football club despite never having met each other in person.

The affable Canadian actor also said he declined to tell his wife about the transaction (which reportedly set the duo back a total of $3.4 million) before sharing her understandable reaction to the news, saying:

“I remember after you reached out about this absolutely insane idea, and I remember seeing Blake and saying, ‘I have bad news, and I have really bad news.

The bad news is I slipped into someone’s DMs again. The really bad news is that, you know, I might’ve bought half of a fifth-tier National League football team in Wales.’

[Her reaction] was not good, Rob! No, not great. We’re still working through that one.”

Given Reynolds’ sense of humor and penchant for goofs, his recollection of the exchange should probably be taken with a grain of salt; Lively has made the trip to Wrexham to watch the team play in person, and you have to imagine the aforementioned docuseries has provided some return on the initial investment.

With that said, he should be commended for giving anyone who ever finds themselves in a similar position that chance to say, “It’s not like I bought a British soccer team” in their defense.