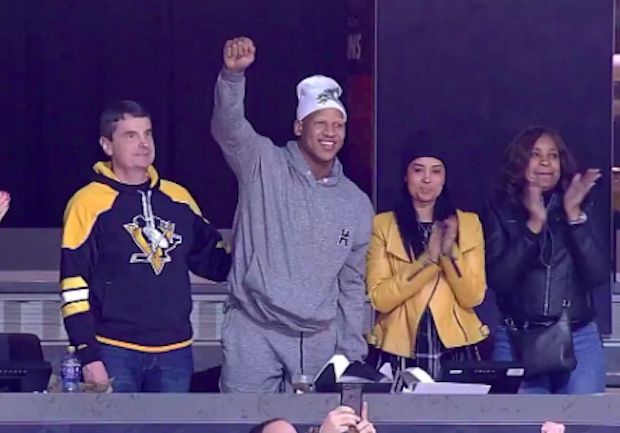 Pittsburgh Steelers linebacker Ryan Shazier confirmed Monday that although he is not able to walk on his own two feet, he now has movement in his legs and is working on walking with the support of a walker. Progress.

The 25-year-old underwent spinal stabilization surgery back in December after suffering a spinal cord injury on a table attempt against on December 4th against the Bengals.

The two-time Pro Bowler is an avid hockey fan and before his injury, has been a regular at Pittsburgh Penguins playoff games the last two years. Last night, Shazier and his fiancée Michelle Rodriguez attended the Penguins-Golden Knights game ay Shazier, as it’s Marc-Andre Fleury’s return to Pittsburgh as a member of the Knights.

Shazier got a standing ovation from the PPG Paints Arena crowd last night as he was helped to his feet by his fiancée, with Pittsburgh fans yet again showing support for his long road to recovery. He acknowledged the crowd with a raised No. 1 finger and a pat on his chest.

According to ESPN, last offseason, the Steelers picked up Shazier’s fifth-year option, which is guaranteed for injury at around $8.7 million.

Last week, Shazier was released from the hospital and is now enrolled in an assisted-walking program, and said it “remains a struggle.”