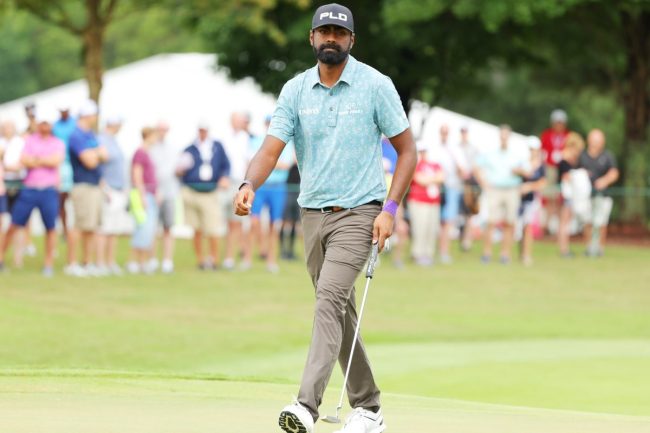 Sahith Theegala is fresh off a 28th place finish in the PGA FedEx Cup in just his second professional season. After turning pro in 2020, the former Pepperdine Wave is listed at 58th in the world rankings.

Theegala landed five top 10 finishes in the 2021-22 season with his best performance coming in the Travelers Championship, where he finished second at 17 under par. While he’s yet to land a win, the up and comer has begun to make a name for himself on the Tour.

For now, that is.

Harold Varner III announced on Tuesday that he’d be moving on to LIV after a decade on the PGA Tour. He joined the latest round of golfers defecting from the Tour, which include world No. 2 Cameron Smith, Joaquin Niemann, Marc Leishman, Cameron Tringale, and Anirban Lahiri.

While some of those moves were not necessarily surprising, there was an interesting comment left below Varner’s LIV post from Sahith Theegala.

Theegala wrote, “You da man,” in response to Varner’s leaving the Tour.

While he could simply be congratulating his fellow golfer on taking the next step in his career, many are wondering if there’s something else to the comment.

One follower replied to the post asking, “What’s it gonna to take for you to join LIV?”

Fans are beginning to speculate on whether Theegala is the next to leave the PGA for LIV. With the PGA season officially over, we may find that answer out soon.