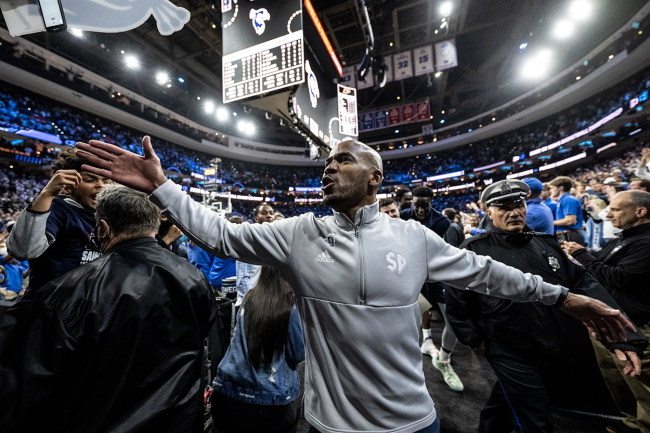 Shaheen Holloway is currently leading Saint Peter’s University to the greatest Cinderella run in March Madness history. Not only is he a fantastic coach, but he was one heck of a ballplayer in his own right.

The 5-foot-10, 173-pound point guard was considered one of the top prospects in the Class of 1996. He and Mike Bibby were considered the top-two players at their position and Holloway had offers from Duke, California and Georgia Tech, among others.

Ultimately, Holloway became the first and only recruit to visit Duke twice and not commit to play for Coach K and the Blue Devils. Instead, the New Jersey-native chose to stay home and committed to Seton Hall.

Prior to getting on campus with the Pirates, Holloway was invited to compete in the McDonald’s All-American Game. He started at point guard for the East team alongside Kobe Bryant at shooting guard.

In the game, Mamba dropped 13 points. Holloway didn’t score as often, but he scored seven points with eight assists and six steals and his more holistic performance won him the MVP of the game over Bryant.

Putting the McDonald’s All-American performance aside, Holloway and Bryant were close friends throughout their formative years. They grew up playing against each other in AAU events, at camps, and at All-Star games.

Holloway has nothing but great things to say about the late superstar and their relationship.

Even before Holloway out-hooped one of the greatest NBA players of all-time, he was on Bryant’s mind. Bryant revealed in a 2020 interview that he had a “kill-list” at 13 years old.

The list was for people who were ranked higher than he was as a recruit. Holloway was on that list.

Bryant ultimately went on to the NBA Draft and Holloway went on to Seton Hall. While with the Pirates, Holloway became the all-time assist leader with a record 681 assists, a record that still holds, and averaged 13.7 points, two steals, six assists and four rebounds per game.

Despite his promise as a prospect and stellar college career, Holloway went undrafted in 2000. He ended up playing seven years of professional basketball all across the globe before starting his coaching career at Iona in 2007.

Holloway then spent three years with Iona before joining his alma mater as an assistant from 2010 to 2018. Now, in his third year as the head coach of Saint Peter’s, he has cemented himself and his team as March Madness greats.