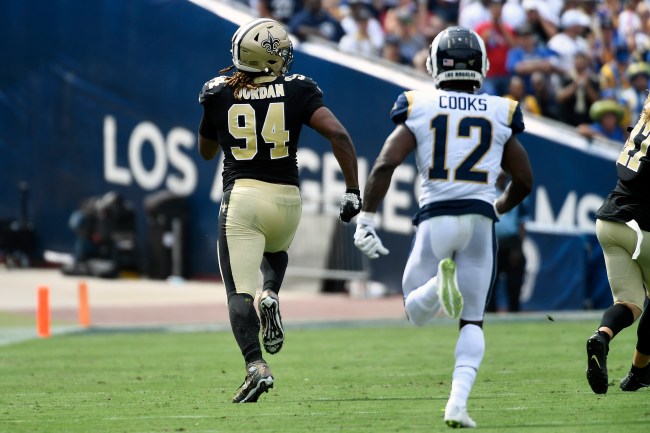 The New Orleans Saints sure do wish that Cameron Jordan’s 87-yard fumble return for a touchdown on Sunday would have counted in their loss against the Ram..

During this afternoon’s Saints-Rams game one NFL ref decided to prematurely blow the whistle to call an incomplete pass after Jordan recovered a strip-sack fumble and was on his way to the endzone. The call was eventually overturned by replay but the Saints were forced to get the ball at the spot of the recovery.

This should've been a touchdown for Cam Jordan and the Saints!

Refs screwed them over. SMH pic.twitter.com/1HJWqAjFfj

Al Riveron explains the reversal of the on-field ruling of an incomplete pass in #NOvsLAR: pic.twitter.com/eXr8fMxTFt

Saints fans were not pleased by the refs for screwing them over again.

Nothing cracks me up more than people saying stop blaming the refs.

When game-changing calls are made it literally kills any momentum the Saints have. What should be a 10-3 game in New Orleans' favor could go in the opposite direction.

That’s a fumble it’s not even close. And Cam returned for six. NFL refs really out there again with this garbage for Rams v Saints smh

After the game, Jordan blasted the “footlocker” ref for blowing the call on the field and not allowing to score a TD.

Cam Jordan said usually you let the play happen, instead of blowing the play dead. Dropped a "Foot Locker" reference when describing the referee. pic.twitter.com/F8J5OfZKAs

No disrespect to footlocker https://t.co/YhiBokGL8Z