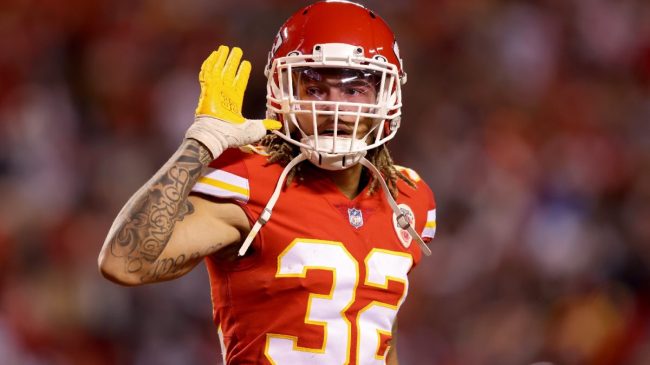 Tyrann Mathieu has been a hot name on the NFL free agent market this offseason.

A number of teams have reportedly reached out to the star defensive back, but none have come to an agreement thus far. The Steelers were linked to Mathieu earlier in the spring, but it doesn’t appear that a deal will get done between the two sides. The Chargers, Eagles, and Cowboys have also been tied to the defender.

Of course, he also could return to the Chiefs, where he’s been a key member of the secondary since 2019.

Over his nine-year career, Mathieu has played in Arizona, Houston, and Kansas City. He’s been an absolute menage in that time, racking up 26 interceptions, six fumble recoveries, and a trio of defensive touchdowns.

Mathieu has been a first-team All-Pro performer three different times, and he helped the Chiefs win a Super Bowl.

Now, it appears that one team is now targeting the safety, and they plan to make an “aggressive push” to land Mathieu.

Saints to make an “aggressive push” for Tyrann Mathieu

After failing to land a safety during the draft, the Saints now are expected to re-visit their talks with free-agent Pro-Bowl safety Tyrann Mathieu and make an aggressive push to try to add him to their roster, per sources. Mathieu was born and raised in New Orleans.

The New Orleans Saints failed to pick up help in the secondary in the NFL Draft, which is apparently leading management to make a run at Mathieu.

He’d be an instant upgrade for the Saints, and the move would represent a homecoming for the defender who’s from the Big Easy and attended LSU.

New Orleans was in talks with Mathieu earlier this offseason, but things stalled. Now that they’ve missed on safety help in the draft, those talks are picking back up.

Fans and media have taken to Twitter in response to the Saints’ targeting of Tyrann Mathieu.

Tyrann Mathieu to the Saints feels like a strong possibility that would fill a glaring need and make the local fan base very excited. GM Mickey Loomis hinted at a “must” on the team’s roster board that we could probably all figure out yesterday. https://t.co/NfuuYwycL7

Some things just look meant to be.

It’s a must. Saints need a safety, didn’t draft one. TM one of the illest to do it. Make sense https://t.co/Di43RfEtNt

Mickey Loomis essentially said this without saying it yesterday. Mathieu is an obvious fit at a glaring need. https://t.co/epwumyfR80

It will be interesting to see if Mathieu does, in fact, wind up in NOLA.