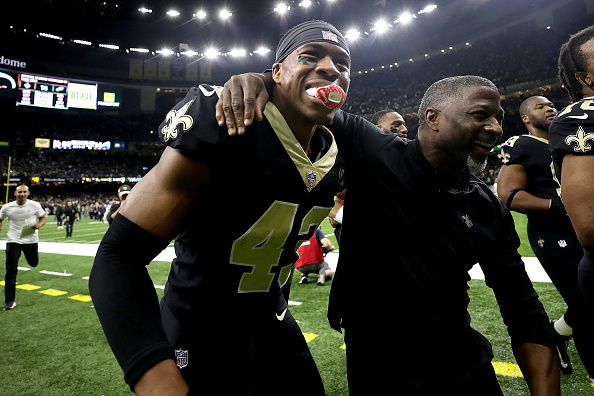 The New Orleans Saints were fairly lucky to beat the Eagles today after Eagles wide receiver Alshon Jeffery dropped a routine pass by QB Nick Foles on the team’s final drive which led to a game-ending interception.

After the game, Saints players trolled the Eagles by uploading a video of themselves getting hyped to the music of Philly native and Eagles superfan Meek Mill on Instagram.

The Saints are playing Dreams and Nightmares! PETTY 😂😂😂😂 pic.twitter.com/Z3vZ3PiAlP

The fact that the @Saints are bumpin Meek Mill in the locker room tonight is COLD BLOODED. #PhilaBoy

The Saints also mocked the Eagles by wearing ski masks in the locker room.

Eagles players wore ski masks this postseason because they stole a playoff spot.

Tonight, Alvin Kamara and Mark Ingram wore them after the Saints defeated the Eagles 😬

Alvin Kamara wore a ski mask after the game.

Mark Ingram: “There’s a lot of fraudulents out there, so we gotta let them boys know who the real ski mask shawties is.” pic.twitter.com/BKfdX3fz5a