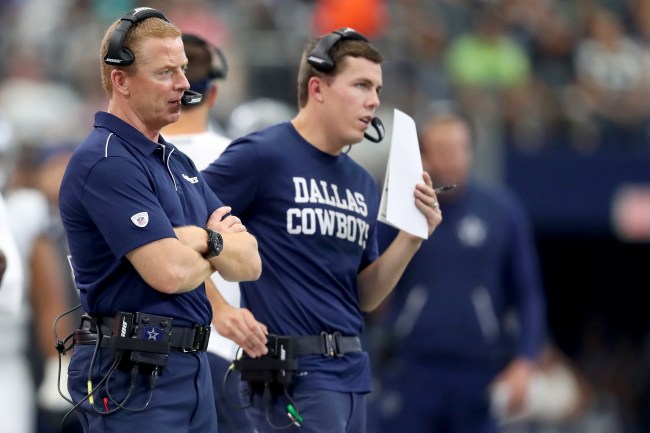 Cowboys offensive coordinator Kellen Moore, on the other hand, wears his signals on his sleeve. And he’s reportedly becoming the opponents most valuable asset.

The Saints defense, who held Dak Prescott to zero touchdowns and one interception to hand Dallas its first loss, looked to the first-year offensive coordinator’s past to predict the future.

Via Steve Wyche of NFL Network:

I was just with the Saints, and players told me that when they played the Cowboys two weeks ago, they went back to look at Boise State tape when Dallas offensive coordinator Kellen Moore played quarterback there and they saw some of the hand gestures and some of the things he liked to do at Boise that he’s incorporated into the Cowboys offense. They were able to pick up some tendencies from that, so now maybe there’s some teams that are getting a read on what Kellen Moore likes to do, and that may be part of the reason why Dak hasn’t had it so easy.

Moore was Boise State’s starting quarterback from 2008 to 2011, so carrying on signals from a decade ago is almost as impressive as it is bold. Speaking of bold, I have no idea why Saints players would divulge this information seeing as there’s a chance they’ll reunite with the Cowboys in the playoffs. As if the Saints needed any help getting boned in the playoffs.

P.S. I would be remiss to write a Boise State post and not include the three most exciting plays in modern college history. The 2007 Fiesta Bowl.