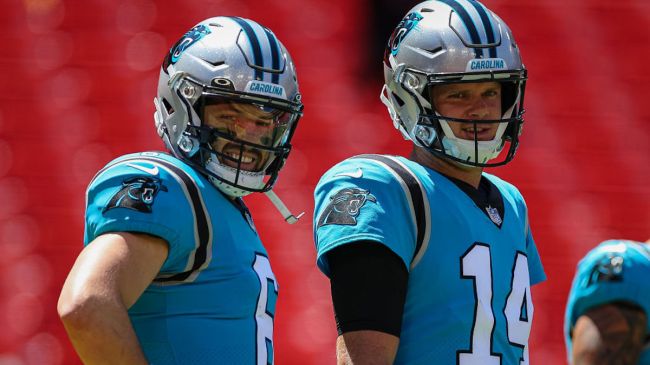 It’s taken just four weeks for Carolina Panthers fans and coaches to find themselves fed up with new starting quarterback Baker Mayfield, as the team currently sits at 1-3 and doesn’t seem to be showing any signs of improvement.

Mayfield, in particular, seems to be on the receiving end of fans’ ire as the former Heisman Trophy winner and #1 overall draft pick has completed just 54% of his passes for four touchdowns and three interceptions. He also has five fumbles so this season (but has lost only one).

“I’m going to refrain from anything big picture until tomorrow,” he said. “At the end of the day, I’m on the headset, I see the things, I know that it’s never just one person here, one person there, it’s a lot of different things, so I’ll try to give you a really well-thought-out answer after watching tapes. All that being said, I believe that we can play better than that. I just feel like we have to expect more from all of us as an offense, and it starts with me first.

“We have to get it corrected, but in terms of any one person I just don’t think it’s right to speak on it right now.”

Unfortunately for Rhule, though, Sam Darnold — the similarly washed-up quarterback that was drafted in 2018 that the Panthers thought they could resurrect — is out with a high-ankle sprain and won’t be back on the field “for a while.”

According to ESPN’s NFL deep state plant Adam Schefter, a Panthers ‘source’ says it’s “going to be a while” until Darnold can play, which also feels like the organization’s subtle way of letting the fanbase know: “Sorry everyone, but we’re going to be stuck with Baker Mayfield for a bit longer.”

Panthers’ QB Sam Darnold is now eligible to come off of injured reserve, but he’s still not close to being from the high ankle sprain he suffered in late August, per source. It’s still, in the words of a source, “going to be a while.”

Mayfield and Rhule are certainly going to have to turn things around quite soon if either of them wants to keep their jobs with the Panthers. In October, Carolina will take on the San Francisco 49ers, Los Angeles Rams, Tampa Bay Buccaneers, and Atlanta Falcons.

RELATED: Fans Can’t Decide Who Is Worse As Kyler Murray And Baker Mayfield Have A Mid-Off In Carolina