NFL World Reacts As Jets Ship Sam Darnold To Carolina Panthers, Marking Yet Another Failed QB Experiment For The Franchise 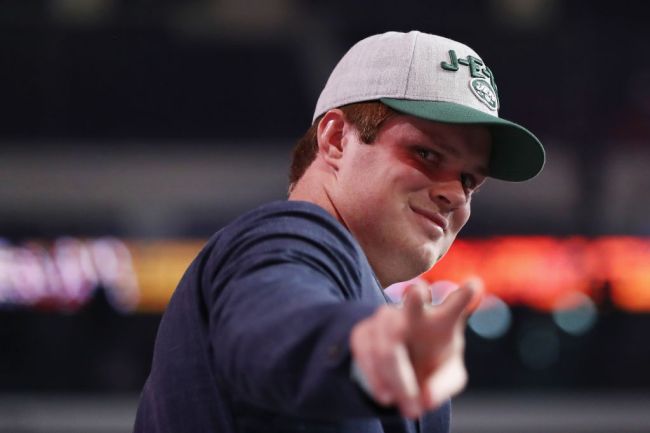 The New York Jets are sending former first-round pick Sam Darnold to the Carolina Panthers for a sixth-round pick in the upcoming 2021 NFL Draft, and a second-and-fourth-round picks in the 2022 NFL Draft, according to ESPN’s Adam Schefter.

Filed to ESPN: Jets trading QB Sam Darnold to the Carolina Panthers for a 2021 sixth-round pick and second- and fourth-round picks in 2022, per sources.

During his three seasons as the Jets quarterback, Darnold completed 59.8% of his passes for 8,097 yards, 45 touchdowns, and 39 interceptions. For content, Darnold’s leading receiver last season was Jamison Crowder, who caught 59 passes for 699 yards and six touchdowns.

Darnold, still just 23-years-old, was drafted by the Jets with the third overall pick in the 2018 NFL Draft. After saddling Darnold with bare-bones, generally nonexistent offensive talent and arguably the worst coach in the NFL not named Hugh Jackson, the infamous Adam Gase, the franchise has decided they’ve seen enough of the 23-year-old and are sending him to Carolina, instead choosing to start the whole process over with an unproven rookie quarterback.

Given the nature of the trade and Jets fans in general (I’m very much one of them), reactions to the deal have varied, from those wishing Darnold well now that he’s escaped New York to those crucifying the Jets for wasting (yet another) young and talented quarterback.

Sam Darnold getting tf out of New York pic.twitter.com/BiAVRNsEm4

To my beautiful boy Sam Darnold: I'm sorry for what they did to you in New York. Knock 'em dead in Carolina.

Me: very excited to enjoy my baseball team finally start their season tonight

The Jets: no. We decided to trade Sam Darnold today after months of endless twitter arguments. We waited until just a few hours before first pitch. Have fun with your emergency Badlands

This means two years for Darnold in Carolina at decent pay for him and the team.

Good for Sam. The Jets didn’t ruin him enough to ruin his career. Yet.

You better not fuck this up @nyjets you diabolical losers. https://t.co/KzjwxxbuHF

Sam Darnold was the absolute least of the #Jets problems the past three years. Deserved better from the moment he got to town. He’s going to be a really good quarterback in the NFL. I’ll be rooting for him. #Panthers

This means two years for Darnold in Carolina at decent pay for him and the team.

As for Darnold, he’ll now be paired with the best coach (literally anyone is a step up from Adam Gase) and skill position players — former Jets Robby Anderson, D.J. Moore, and potential MVP candidate Christian McCaffrey — of his career. Still just 23-years-old, the former University of Southern California quarterback has a legitimate shot at resurrecting his NFL career.