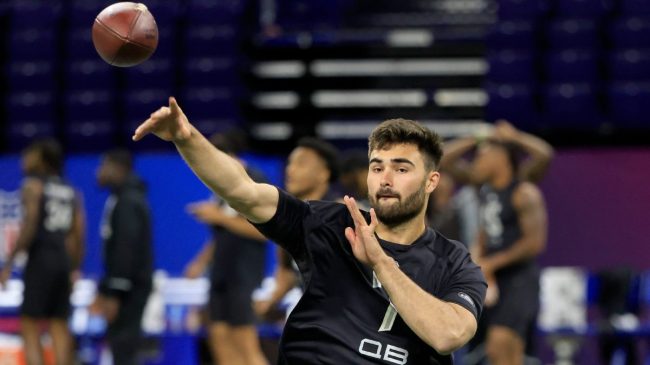 The NFL Draft is quickly approaching.

As is the case in most years, the quarterback position is a focal point. This class has been criticized a bit for not having a top tier passer, but there are a few players that could make an impact.

We’ll likely see three to four gunslingers selected in the opening round. One of those should be North Carolina’s Sam Howell.

Howell is widely considered one of the top two passers in this year’s class. He should hear his name called early in the selection process.

In three seasons with the Tar Heels, Howell threw for more than 10,000 yards. He tossed 92 touchdowns on 64% passing while leading his team to 21 wins and three bowl appearances.

Now, he’s turning his sights to the next level.

Howell has already participated in the NFL Combine. The star passer threw for NFL scouts but did not take part in the testing process.

Professional teams are getting a chance to see Howell one last time before the draft. He’s participating in North Carolina’s pro day on Monday, and his performance thus far has been impressive.

Howell is in Chapel Hill working out for pro scouts one last time. He’s been awing bystanders with some absolute dimes.

Howell is considered a top 10 pick at most mock draft sites. If he continues to impress in the coming weeks, he could secure his spot as the top passer taken.

The NFL Draft is set to begin on April 28th.