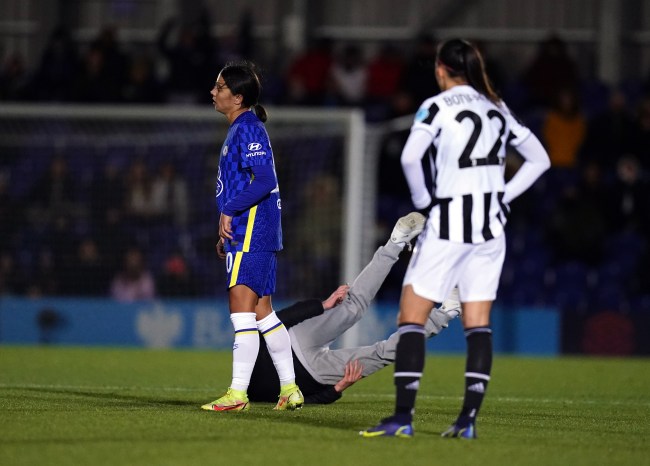 Chelsea forward Samantha Kerr might be playing the wrong form of football. The 28-year-old Australian star did not take kindly to a pitch invader on Wednesday night and absolutely rocked his world.

For some reason, during the UEFA Women’s Champions League match between Chelsea and Juventus, security was nowhere to be found as a fan ran onto the field. After disrupting play, appearing to yell something at the players and taking a selfie, he was violently interrupted.

As the fan strolled back toward the sideline, Kerr came out of nowhere and leveled him. She threw a vicious shoulder into the fan and sent him face down into the turf.

With the fan on the ground, security finally stepped into action. He ran away for a moment but was eventually apprehended.

Full unedited video here for any journalist that wants to use it. Don't need to ask permissions as I'll be asleep for next 8 hours. pic.twitter.com/PI76WC87Uw

Meanwhile, on the pitch, the referee made a rather baffling decision. She walked over to Kerr and booked her with a yellow card.

In response to the nonsensical decision, fans in attendance ferociously booed the referee. Booking Kerr for doing what security wouldn’t doesn’t make any sense. But it happened.

Sadly the live stream footage doesn’t show Sam Kerr colliding with the pitch invader, but it does show her getting booked, and the crowd booing the referee for it.#chelsea #juventus #samkerr #pitchinvader pic.twitter.com/tr8Yswomhj

The incident, which came to a conclusion in the 88th minute, did not effect the result of the match, which ended in a 0-0 draw. Due to the final score, Chelsea leads Group A and is in good position to advance to the quarterfinals of the UEFA Women’s Champions League.

Kerr will have to be careful in her next match not to wreck any pitch invaders because it could, for some unknown reason, cost her another yellow and potential suspension. Hopefully her yellow card gets rescinded by those more rational.