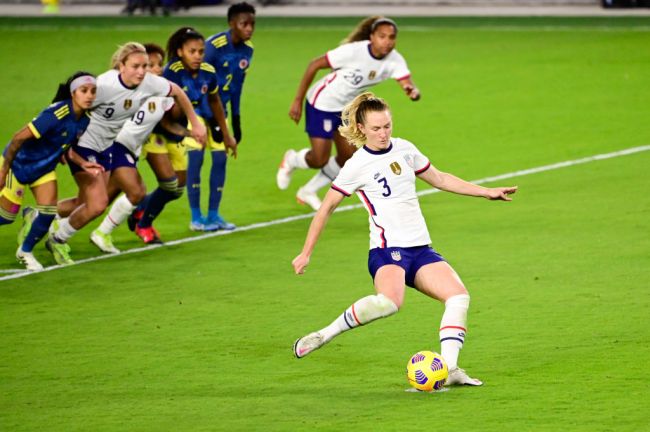 The Mewis sisters are on a roll. As the United States Women’s National Soccer Team returned to the pitch for the first time in 2021, Sammy recorded a hat trick while her big sister Kristie added a fourth goal in the late minutes of a friendly against Columbia. With the 4-0 route on Monday night, the two have combined for the team’s last five goals dating back to last year.

After nearly 10 months off due to COVID-19, the reigning World Cup champions faced the reigning runners-up in a friendly back in November and beat the Netherlands 2-0 on goals from Rose Lavelle and Kristie. It was a special moment for the 29-year-old as she made her first USWNT appearance in nearly six years. Mewis received call-ups to the active squad during the 2013 and 2014 seasons and earned 15 caps for her country but abruptly fell off the team’s radar as she bounced around from one National Women’s Soccer League roster to the next. She began to find her footing with the Houston Dash in 2018 until she suffered a torn ACL in May of that year. It was a long recovery process for Mewis, but the hard work paid off and she regained her prominence with the Dash as the team won the league in 2021. Her strong play resulted in her first national team call-up in more than half of a decade, joining her younger sister, who had been on the roster since 2014. When Kristie scored against the Dutch, Sammy was the first to run over to congratulate her.

Welcome back! Kristie Mewis scores in her first game with @USWNT in 6 years 😱 pic.twitter.com/axtVgrV0Yc

Both Mewies (as they’re called) were back on the field when the team returned to camp at the turn of the new year, and Monday was an incredible day for the both of them. The United States got on the board first with an early finish from Sam. Lindsey Horan’s incredible sense of time and space set Megan Rapinoe up on the corner of the box for a smooth cross across the middle and the opener.

Fast start in Florida! @mPinoe back to her tricks, @sammymewy finding the back of the net! 🙌 pic.twitter.com/llw4xZO8M1

Less than 30 minutes later, Sammy found the net again. Horan began the tic-tac-toe with another silky touch to Carly Lloyd on the far post. Lloyd received the ball on the goal line and nods it back across for the tap-in header.

The lead held through halftime and extended with a penalty kick just out of the break. Sam took the shot from the spot and capped her hat trick.

HAVE A NIGHT SAMMY MEWIS!! 👏

The #USWNT midfielder had a hat trick in the team’s first game back 🎩🎩🎩pic.twitter.com/yWElSdQNHn

Sammy’s night ended in the 64th minute when she was replaced by Lavelle and Kristie came on for Horan. She picked up her second goal in two games with a confident finish from point-blank. Lloyd did Lloyd things to set up the cross and put a perfect ball in front.

Carli Lloyd with the sauce

Kristie Mewis with the bucket pic.twitter.com/TTRll1anER

Her little sister was the so happy with the result.

The Mewises have now accounted for the team’s last five goals and the USWNT extended its unbeaten streak to 33 straight games and 49 on American soil.

Sammy was the player of the match and was smiling ear-to-ear in the postgame press conference.

Sam Mewis on winning tonight's match with her sister: "I'm just so proud of Kristie. … I feel so lucky that we both get to be here and it's just been so fun. Sorry that's a lame answer, but it's true." pic.twitter.com/1q4R0dTJem

The United States will next play on February 18th against the Canada and will host the northernly neighbors in Orlando.