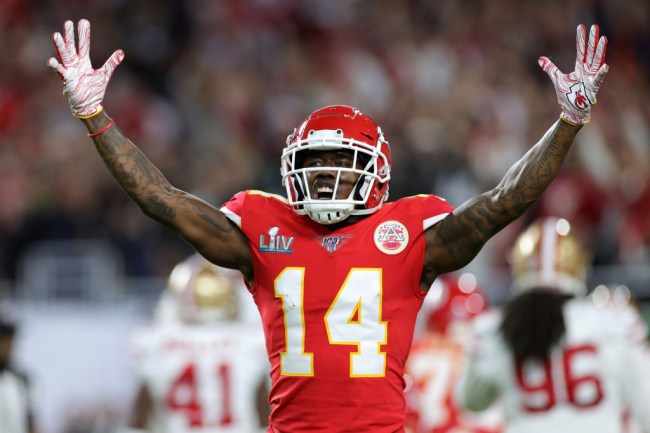 Just a few days before his Chiefs eventually came back to beat the 49ers in Super Bowl LIV, Sammy Watkins talked with the media about what his future may hold after Sunday’s big game. It wasn’t necessarily a ‘normal’ statement, especially just days before the Super Bowl, but it was certainly an honest one.

Watkins kept it real and admitted that he may take a full year off.

“I don’t know what I’m going to do,” Watkins told USA Today. “If we win it, I might chill out. I might sit out a year. You just never know.

“Not retiring, but I might just want to rest up and chill. I don’t know. I don’t want to say I’m going to do something, but you never know. I might want to go somewhere else and create another Super Bowl team. So it’s just all about how I’m feeling.

Well, the Chiefs won, so now the focus has flipped on what Watkins is actually going to do next season.

He joined SiriusXM’s NFL Radio on Tuesday and was asked about his possible year off. He cleared the air and said that he will be playing next season, but one of his main focuses this offseason is focusing on his health, specifically his mental, and making sure all is ok in his personal life.

“I don’t control the contract, a trade or if they’re going to give me a bigger contract,” the Chiefs talent said. “That’s not my worry. I’m not really focused on the money aspect of it. I’m really focused on my health, mental health and really checking in on and making sure I’m ok with my life, my family, my wife, my kids. Once I figure that out, I think I will be fine.”

“I’m too young to retire. I have not done enough yet, why not go and win another championship and continue to be great?”

You certainly can’t blame Watkins, or anyone else, for making sure everything is good with life outside of the game of football before worrying about what next season may hold. Just like the radio interviewers of the show point out, it’s awesome that he’s taking that approach.

Watkins is just 26-years-old and even though he was only drafted in 2014, he’s already played for three different franchises. He’s signed through the 2020 season and carries a sizeable cap-hit of $21 million, according to Sportrac.