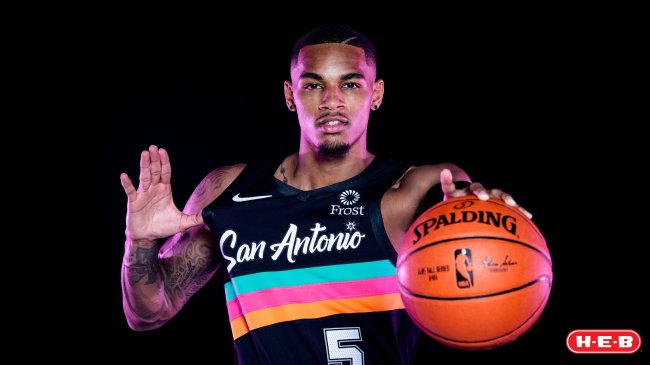 As NBA franchises around the league are releasing new 2020/21 kits, the San Antonio Spurs decided to get in on the action and dropped some of the best uniforms in a long time. The ‘Fiesta’ jerseys will serve as the team’s City Edition Uniform and brings old school swag with new school design.

This is the first time that the team has incorporated the blue, pink and orange into its uniforms, but the color scheme was prominent in some of the teams warmups, jumpsuits and gear back in the day. Now it will be the dominant accent to an alternate set that might be the best in the league. New Orleans’ Mardi Gras uniform and Memphis’ throwback jerseys round out the top three in my book.

Spurs guard Lonnie Walker reacted to the uniform on his instagram and was pretty fired up. He gave his mother a ring on FaceTime to show them off:

Here is @lonniewalker_4’s reaction to the #SpursFiesta jerseys. First thing he did.. call his mom 😊 pic.twitter.com/hz0DO0dGGF

Here is what the internet had to say about San Antonio’s new look:

Visual representation of every @spurs fan after the #SpursFiesta jersey drop: pic.twitter.com/xMEWdk4ywG

#SpursTwitter today really feeling all kinds of emotions on the TL and it’s barely gonna be noon on Friday the 13th #spursfiesta #GoSpursGo pic.twitter.com/YUlzeFuYbw

Another look at the new #SpursFiesta City Edition Uniforms. These are clean. #GoSpursGo pic.twitter.com/8iVLDbBKq0

My December 3rd paycheck hitting and immediately being spent on #SpursFiesta jerseys pic.twitter.com/fmRFFMiEdp

The Spurs new alts are objectively Good (and might be the only new NBA unis that are). #spursfiesta