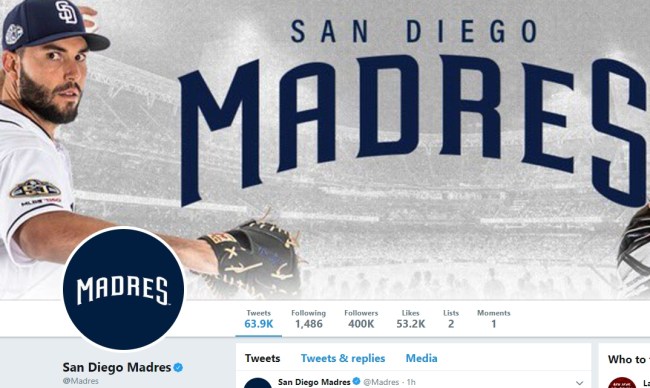 The social media team for the San Diego Padres thought it was a brilliant marketing strategy to rename the team to the “San Diego Madres” for Mother’s Day. This is despite that the San Diego Padres are not named for regular “fathers,” but pays homage to the Spanish Franciscan friars who founded San Diego in 1769. The word “padres” doesn’t mean “dad” in this sense but rather another term for a priest or deacon. Never-the-less, the San Diego Padres wanted to show how great they are by changing their name in a shallow marketing scheme.

The marketing team for the Padres were so invested in the “Madres” idea that they even changed their Twitter handle from “@Padres” to “@Madres.” The only problem is that they didn’t occupy the @Padres account and left it unused. One awesome dude saw that the Twitter handle was available and immediately snagged the Padres Twitter account. The Padres literally and figuratively got owned.

#Padres hilariously lose their Twitter handle after changing it to @Madres for #MothersDay pic.twitter.com/XPKEM3Qlou

Ricky Padilla stole the Padres’ Twitter name right from under the MLB team. Padilla, who appears to be a college baseball player for Calvin College and a die-hard Padres fan, was happy to take over the social media account for the baseball team and answer important roster questions and even ridiculing Padres second baseman Ian Kinsler who is batting a putrid .177 and has an abysmal .238 OBP with zero home runs.

Despite the Padres making a dumb mistake and Padilla rightfully owning the @Padres account, Twitter reversed the action and returned the @Padres to the baseball team. The Padres didn’t even have to pay Padilla a king’s ransom to get their Twitter account back, they didn’t even give the kid some free tickets.

All I wanted was some tickets😢 @Madres

And if you’re looking for a social media manager job, the San Diego Padres are hiring.