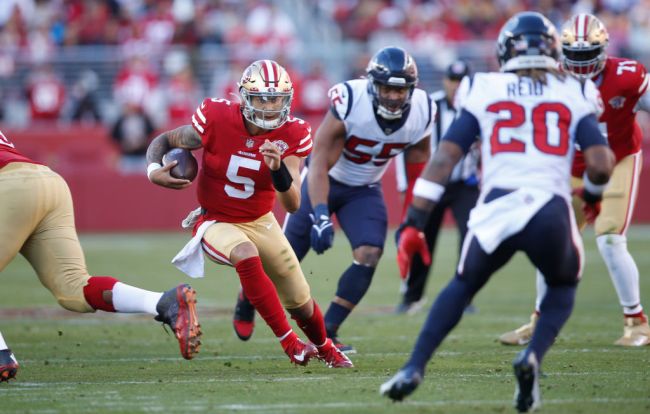 Throughout this offseason, fans have heard repeatedly about what they can expect from Trey Lance when he officially takes over as the starting quarterback for the San Francisco 49ers in Week 1.

His teammates have had plenty of great things to say about him over the past few months, but there have also been reports that have been cause for concern about what the future holds for the second year quarterback.

Now 49ers head coach Kyle Shanahan has chimed in with his thoughts on what we can expect to see from Lance and on why he believes Lance will be a successful quarterback in the NFL.

“I think the biggest thing on Trey that everyone’s got to realize is he is younger. Trey’s got more horsepower inside of him than I think he even knows of, just from the whole talent, but also what he’s made of, how intelligent he is. I think he’s going to be able to overcome adversity. I do believe he’s going to be able to handle this pressure. It’s going to be hard, but that’s what the position is. There’s only so many people in this world that have the talent to be put in that spot, and there might be 32 of them, but there’s definitely not 32 of them who have the talent and who have the stuff inside that allows you to handle that position through the ups and downs and everything. I don’t care how good you are, people are going to come after you.”

Lance’s ability to handle pressure is something he’s going to need to put on display from the second he takes over as the starter because he’ll be facing plenty of pressure next season. The 49ers are coming off of a season where they made a run to the NFC Championship Game and had aa chance to beat the eventual Super Bowl winners.

If the team doesn’t appear to be on that same level next season, it could quickly turn fans against Lance and leave some wondering why the 49ers were in such a rush to move on from Jimmy Garoppolo.

If he can keep the 49ers playing at a high level then he’ll quickly silence the doubters who have been so vocal this offseason. Either way, we should learn pretty early on how Lance responds to pressure.