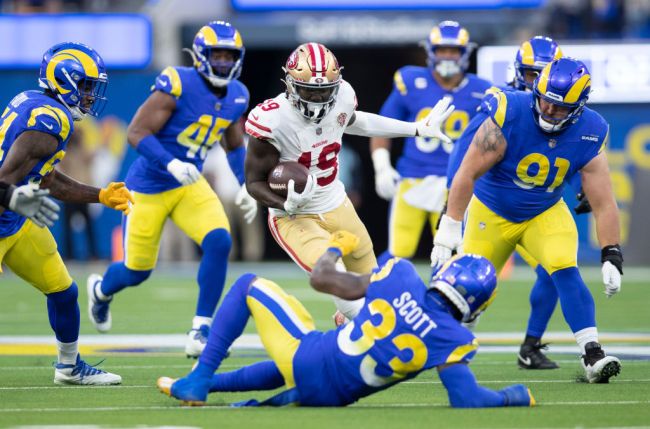 Over the course of the NFL offseason, Deebo Samuel has been locked in a contract dispute with the San Francisco 49ers.

With just a year left on his rookie contract, Samuel is looking for a long-term extension that will pay him closer to the top receivers in the league. The 49ers seemingly haven’t given him the contract offer he’s looking for, leading to him requesting a trade at one point this offseason.

When the NFL Draft came and went without a trade, it seemed likely that Samuel and the 49ers would settle this quickly. However, that hasn’t been the case and Samuel wound up skipping OTAs before finally showing up for mandatory minicamp a couple of weeks ago.

It’s an uncomfortable situation for the 49ers as Trey Lance prepares to take over as the team’s starting quarterback, but is doing so without much certainty about his team’s top receiver.

While the 49ers and Deebo still remain in limbo, one of the team’s other stars has come out in support of his teammate. During an appearance on “Bussin With The Boys”, George Kittlerevealed that he supports Deebo trying to get paid.

“Everyone loves Deebo. I also think, like, it’s the NFL. Go get what you deserve, dude. Deebo deserves to get paid a lot of money. They don’t wanna pay you a lot of money? Do what you need to do… If you wanna leave, there’s no bad blood with me.”

It is unclear exactly how much Deebo is asking for, but we recently saw AJ Brown secure a 4 year, $100 million deal in similar circumstances. Those might not be numbers that appeal to the 49ers, especially if Deebo doesn’t want to run the ball anymore.

However this turns out, it seems it’s not going to impact Deebo’s relationship with his 49ers teammates.