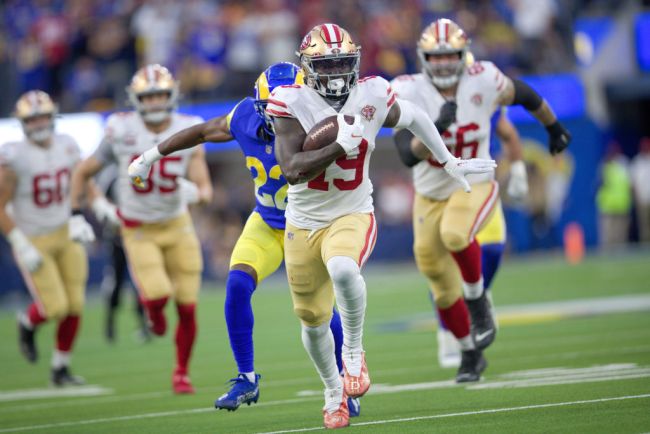 This NFL offseason has been loaded with blockbuster trades changing the landscape of the league. Now it looks like football fans will be treated to another shocking trade.

Deebo Samuel had recently become the focus of trade speculation as he worked to secure the biggest non-quarterback contract in the league. As his efforts to land an extension with the San Francisco 49ers seemingly went nowhere, the possibility of a trade became more and more intriguing to fans.

Now we know for sure that Deebo is looking for a new home. Today, ESPN’s Jeff Darlington reported that Deebo has officially asked the 49ers to trade him.

According to Adam Schefter, Deebo had recently been holding up contract talks with the 49ers.

Adam Schefter thinks that Deebo Samuel is “not wanting to get a deal done with San Francisco”.

Well, that would be interesting 🤔 pic.twitter.com/ajl5auwgbf

“San Francisco would pay Deebo Samuel today, tomorrow, the next day. It’s not hard to figure out what the contract would look like, we’ve seen some of the top numbers in the league. This, I think right now, is Deebo Samuel not wanting to get a deal done. . . . The 49ers are ready. Deebo Samuel is the one who has put a halt to everything for right now.”

Deebo Samuel forcing his way out of San Francisco is huge news. Deebo was the focal point of the 49ers offense throughout last season and gave them a unique threat as both a receiver and a runner.

Now the question becomes where Deebo will land. We know that the Jets have been trying to trade for a receiver this offseason. They made an offer for Tyreek Hill, but were outbid by the Miami Dolphins. They have the draft capital to up their offer and try to make a move for Deebo.

The Chiefs have been looking for a replacement for Tyreek Hill since trading him. They have a pair of first round picks this year. The one thing they seemingly don’t have is the ability to pay Deebo what he wants.

Maybe the Packers could swoop in and get their Davante Adams replacement.

With 8 days until the NFL draft and Deebo Samuel now trying to leave the 49ers, it doesn’t seem like this offseason will be calming down any time soon.