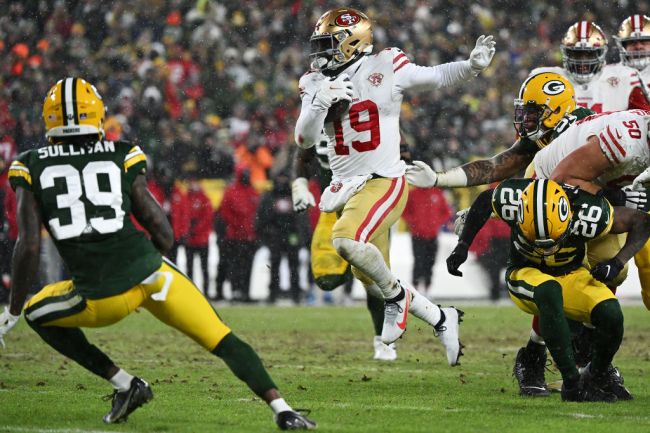 Deebo Samuel recently made it clear to the San Francisco 49ers that he’d like to continue his NFL career elsewhere as he enters the final season of his rookie contract. While the 49ers had been reported to not be interesting in allowing that to happen, it seems they do at least have a price in mind for him.

On today’s episode of “Monday Morning Quarterback”, Albert Breer reveals what it would take for the San Francisco 49ers to trade Deebo.

4.25 MMQB!!@Jaguars owner Shad Khan's more involved this spring. On the No. 1 pick? "I have an opinion." He, Baalke, Pederson will seal the decision Wednesday.

I could be wrong, and the reason I’d emphasize that up front is I’m not sure how far someone else is willing to go to get him. I just feel like, at this point, with how carefully the Niners are managing the situation, it’d take a lot for them to move off their spot.

How much would it take? One rival GM said to me Sunday that he believes you’d probably have to go to John Lynch with two first-round picks, which would replace the 2022 and ’23 first-rounders the Niners dealt away last year to move up for Trey Lance, to wriggle Samuel free of San Francisco. And that is a lot, even in comparison to the other big receiver trades of the early parts of this year.

Maybe there’s somebody out there willing to make that kind of investment in Deebo and then give him a huge extension on top of it. It’s just hard to picture the San Francisco 49ers getting this for Deebo when we’ve already seen 2 of the league’s top 5 receivers traded for less this offseason.